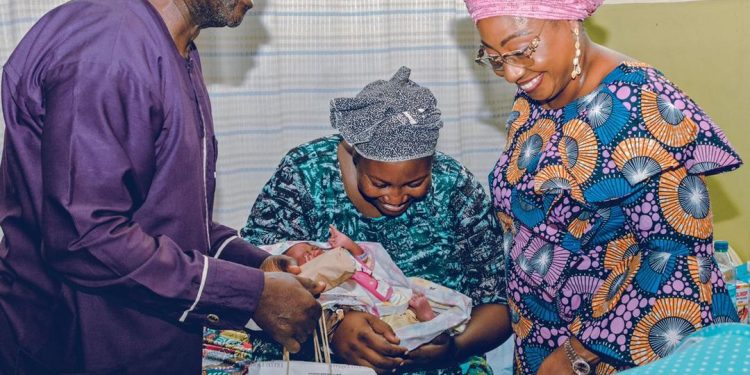 The triplet parents at the Ekiti State University Teaching Hospital (EKSUTH) in Ado-Ekiti have been visited by the governor of Ekiti’s wife, Erelu Bisi Fayemi.

The newborns are the first offspring of Venerable Hezekiah Akenroye, a retired priest from the Anglican faith, age 71, and Mrs. Durodoluwa Felicia Akenroye, age 45. They were wed in April 2016.

Erelu Bisi Fayemi congratulated the parents and, after learning of the triplets’ arrival through viral news on social media, gave the infants money and other presents. She also urged the parents to raise the children in the Lord’s ways.

The first lady, who stopped by the hospital her route to a social event, expressed her joy at the infants’ arrival and said it was proof that God answers prayers.

She congratulated the couple and used the opportunity to encourage other couples who were trying for a child to not give up and to continue to believe in God.

The elderly father of the children, Venerable Hezekiah Akenroye, thanked the first lady for her thoughtful act and expressed his happiness at finally having triplets after a long period of waiting.

He claimed he had never thought that God could still give him a son in this life.

READ ALSO:  #2023 & Successorship: One of Him is Enough for Nigeria - Obanikoro

Erelu Bisi Fayemi, the first lady of Ekiti State, had given him some lovely presents, and he thanked God for them, emphasizing that God’s timing is always the greatest.

PCC list: “I am concerned about the weak APC incentive scheme.” Joe Igbokwe