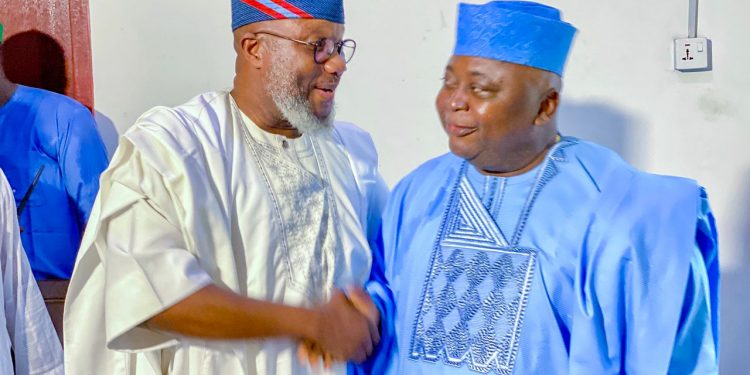 The Peoples Democratic Party’s governorship candidate in Ogun State, Hon. Oladipupo Adebutu, and his deputy, Abdul Kabir Akinlade, have come under fire for a deal they made regarding the state’s 2023 governorship election. According to Ogun Integrity Vanguard, their plan to divide up state resources among friends revealed a corrupt mentality.

The organisation urged the Ogun electorate to beware of politicians whose aim in running for office is not the development of the state but the cornering of resources in a statement released by its secretary, Comrade Abdulkadir Adelaja, on Friday.

The group’s response came on Friday, as news of the pact between Adebutu and Akinlade, an adherent of former Governor Ibikunle Amosun, broke, to massive anger on social media.

The deputy governorship position for the party, the Ogun West senatorial ticket, and two State House of Assembly tickets in Ogun Central would be conceded to the Amosun group, according to the seven-page document titled “Alliance Agreement between Hon. Oladipupo Olatunde Adebutu and Hon. Adekunle AbdulKabir Akinlade in respect to the 2023 Election Into the Offices of Governor, Deputy Governor, Related Elective Positions and Appoint

Ogun Honesty However, Vanguard questioned why a political party that asserts to be on a rescue mission in Ogun State would be preoccupied with sharing appointment posts rather than presenting a plan that plainly surpasses the Building Our Future Agenda of the current Dapo Abiodun administration.

The statement read: “We find it utterly perplexing that the PDP candidate for Ogun State, his running mate, and the party leadership are busy formulating plans on how to divide Ogun positions and resources among their cronies regardless of merit and competence, and at the same time the Dapo Abiodun administration in the state has been busy unveiling and commissioning project after project to the delight of the good people of Ogun State. It is therefore quite clear that they have a crooked worldview.

“Adebutu and his running mate are considering how to divide the positions of substantive commissioner, Special Adviser, Senior Special Assistant, Special Assistant, Statutory Board Chairman, and local government executive chairman, but they haven’t mentioned how they plan to improve the lives of the people of Ogun State. Clearly, they have nothing worthwhile to give.

It is obvious that they do not care about the people. This demonstrates unequivocally that, if they ever manage to reach Oke Mosan, they will pose a threat to the people’s existence and wellbeing.

The statement said: “We urge the people of Ogun to reject these political marauders and rally behind their able governor, Prince Dapo Abiodun, whose goal over the past three and a half years has been to make Ogun State a top investment destination. Among other historic projects, the governor is scheduled to inaugurate a brand-new airport in the state in December.

Uzodimma emphasizes the coordination between the government's many branches