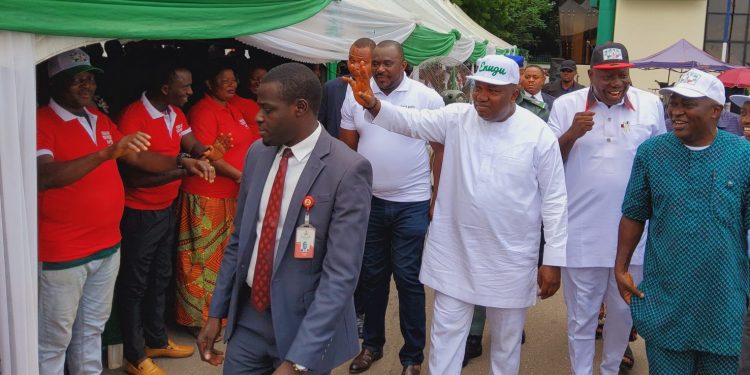 Enugu State Governor Ifeanyi Ugwuanyi stated on Thursday that he really hopes that all communities in the State will continue to coexist in peace and harmony in order to advance and develop the State steadily.

The Governor made the statement when members of the Mgbowo Community in the state’s Awgu Local Government Area paid him a visit at the government house in Enugu to thank him for his good deeds, peaceful demeanor, profound concern for their well-being, and concerted efforts to address a wide range of their socio-economic challenges.

At the Government House in Enugu, the residents of Mgbowo, led by the Commissioner for Science and Technology, Sir Obi Kama, expressed their unwavering support for the governor-led Peoples Democratic Party (PDP) leadership in Enugu State, Barr. Peter Ndubuisi Mbah, his running mate, Barr. Ifeanyi Ossai, and the PDP’s candidates for the Enugu West Senatorial District, Aninri/Awgu/

Gov. Ugwuanyi, who is the leader of the PDP in Enugu State and the Southeast geopolitical zone as well as the party’s candidate for the Enugu North Senatorial District, thanked them for their unity and support for his administration and urged the ecstatic people of Mgbowo to hold on tightly to their belief in the PDP, assuring them that Barr. Mbah and Barr. Ossai will build on the foundation his administration laid.

In a previous statement, Chief Sir Collins Okelu, President General of Ekpulambo Mgbowo, said that “Mgbowo Ward has gained so much from your purposeful and people-oriented leadership in the state in so many sectors.”

Among the governor’s notable accomplishments in Mgbowo Ward, according to Chief Okelu, are “the construction of ultramodern classroom blocks at Community Primary School Ezioha Mgbowo, upgrading Technical and Vocational College, Imama Mgbowo to one of the best and most sought-after in Enugu West, creating an access road from Old Road, Amaiyi Mgbowo to Enugu-Port Harcourt expressway, and construction of three solid box culverts

The President General thanked Gov. Ugwuanyi for appointing their sons and daughters to important government positions, saying: “Mgbowo people owe you a huge debt of gratitude and be rest assured that this debt will be paid with our block votes in next year’s general election for the PDP’s candidates for governor, Dr. Peter Ndubuisi Mbah and his deputy, Barr. Ifeanyi Ossai, senator (Enugu West), Engr.

“Our visit to you today is to offer our unwavering support to you and our candidates since we have neither gold nor silver to present you in appreciation for your ongoing generosity to our people.”

The governor’s senatorial campaign, that of the PDP governorship candidate, Barr. Mbah, his running mate, Barr. Ossai, and all other party candidates were all visited separately by numerous support groups who pledged to mobilize the electorate to support the PDP and its candidates at the polls. This occurred in Enugu’s Government House.

The organisations praised Gov. Ugwuanyi for establishing stability and sound governance in the state despite the nation’s problems with the economy, security, and public health.

Also praised were the governor’s efforts to empower women in the state through employment opportunities, political appointments, and a number of successful initiatives including the World Bank’s APPEALS (Agro-Processing Productivity Enhancement and Livelihood Support) program.

The groups went on to commend Gov. Ugwuanyi for the impressive development projects his administration carried out despite the state’s limited resources, such as the Opi-Nsukka dual carriageway, the Township Stadium with a seating capacity of 5,000, the T-junction Flyover Bridge at Nike Lake Road in Enugu, the sizable projects at the recently founded State University of Medical and Applied Sciences (SUMAS), Igbo-Eno, Enugu State, as well as