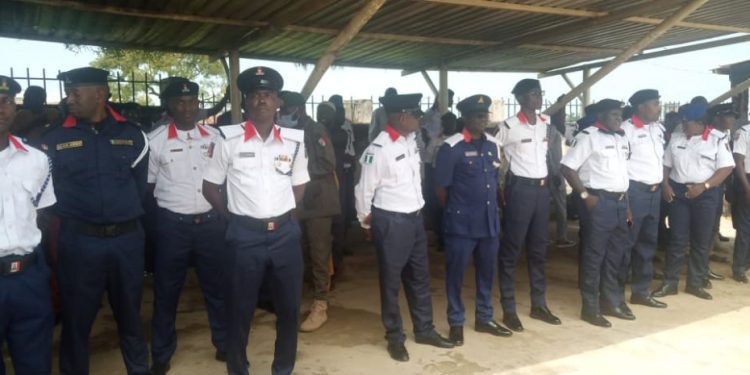 On Thursday, the Bauchi State Command of the Nigeria Security and Civil Defence Corps (NSCDC) presented their new ranks to 72 newly promoted officers.

The Commandant of the NSCDC, Mr. Ameh James, spoke during the occasion in Bauchi and praised the newly promoted officers for their tenacity in carrying out their responsibilities while extending his congratulations.

He claimed that responsibility, effort, and selfless service are all required for promotion to come from God.

He claimed that the promoted officers received their promotions as a result of their work ethic, dedication, and initiative.

While urging other officers who have not yet been promoted to make sure they work harder and are not discouraged when performing their jobs.

The head of the NSCDC stated that Ahmed Audi, the Commandant-General of the NSCDC, had done enough to promote the officers to their new levels and he expected them to double their efforts in carrying out the Corps’ mission.

“This occasion will live on forever in the memories of the officers who received successful promotions.

“However, if you want success, you must be generous and humble by treating your subordinates with kindness and compassion.

He urged all the policemen who had been promoted to buckle down and work even harder because they still had a lot of work to accomplish.

Nigeria at 62: The FG outlines the celebration schedule on the country’s independence day