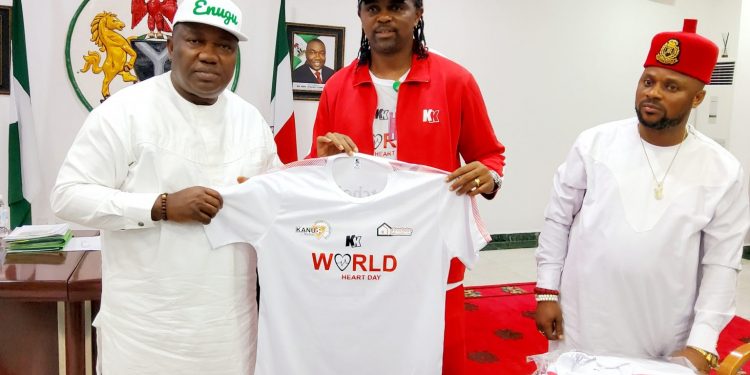 Kanu Nwankwo, a former professional football player and Olympic gold medalist from Nigeria, has praised the leadership qualities of Enugu State Governor Ifeanyi Ugwuanyi, calling him a god-fearing, calm, and kind leader who has made many sacrifices and devoted efforts to keep the state peaceful and forward-moving.

According to Nwankwo, Gov. Ugwuanyi is “a guy of good heart and a peaceful leader,” which is why Enugu State is calm.

The football legend Nwankwo, also known as “Papilo,” spoke yesterday while leading a delegation of the Kanu Heart Foundation to the Government House in Enugu for a courtesy visit to Governor Ugwuanyi. He praised the governor for his good work in the state despite the economic, security, and public health issues plaguing the nation.

Gov. Ugwuanyi was informed by Nwankwo, who described Enugu as his “second home,” that he and his team were in the city in preparation for the Kanu Heart Foundation Fitness Walk, which is scheduled to take place at the end of the month to recognize this year’s World Heart Day.

The founder of the Kanu Heart Foundation and former international football star disclosed that Enugu was chosen for the event since it is the most tranquil state in the Southeast geopolitical zone.

He said, “We are really appreciative of what you are doing. We pray that God would grant you strength and blessing. We carry our good deeds with us forever; you will also carry your good deeds with you. We shall all think about you and never forget all that you have done for us.

“We are confident that by supporting your efforts, you will accomplish more. And we are aware that even if you are not present tomorrow, your good deeds will speak well of you. Keep going.

The free medical care would be provided on the day of the fitness walk in Enugu, according to the founder of the Kanu Heart Foundation, “to know who is fit and who is not fit.”

Nwankwo expressed confidence in the governor’s backing for them as they requested the approval and assistance of the Enugu State Government for the success of the planned fitness walk.

He said that since its founding in 2000, the Kanu Heart Foundation has performed 600 open heart surgeries, with 200 patients on the waiting list, and that 150 natives of Enugu State have benefited from the program “and we have 45 on the waiting list.”

Nwankwo, who thanked God for sparing his life after battling a cardiac condition, explained what inspired him to start the life-saving humanitarian effort by saying: “I am a symbol of hope and I feel that people out there would learn from me and that is why I am doing what I am doing.”

The fitness walk, according to Kanu Nwankwo’s manager and CEO of First Choice Afro Villa Ltd., Engr. Jerry Patrick Onuokaibe, is intended to raise awareness about heart-related illnesses, prevention, early identification, and treatment. “We are here (Enugu) because we know that this Kanu Heart Foundation walk will be done peacefully because you are a man of peace,” he said to Governor Ugwuanyi.

Gov. Ugwuanyi welcomed the football icon and his crew to the Government House in Enugu and invoked the blessings of the city’s founding fathers on them. He also expressed his satisfaction at Nwankwo’s humanitarian act, noting that it is quite uncommon.

The governor praised Nwankwo for the life-saving foundation he had established and said it was something for which he (Nwaknwo) will be remembered on a global scale.

Gov. Ugwuanyi pleaded with God to stay by him and see him through while assuring Nwankwo of the support and dedication of his administration to the event’s success.

Nwankwo was accompanied by Chief Friday Emeka Edeh, Chairman and CEO of the Castle Majestic Hotel in Enugu.