Driver In Lagos Arrested By EFCC For Attempting $17.5M Fraud 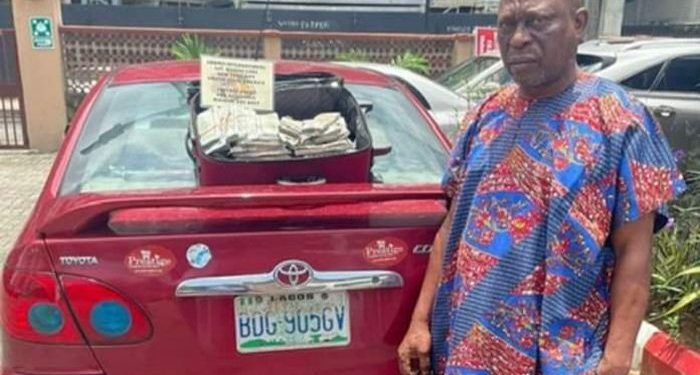 Olabanji Aluko has been detained by the Economic and Financial Crimes Commission (EFCC) on suspicion of defrauding $17.5 million in advance fees.

On September 8, 2022, Aluko—who claimed to be a driver—was taken into custody at a well-known restaurant in Falomo, Ikoyi, Lagos.

The suspect asserted that he had scheduled a meeting with Col. Remi Abdulrahman Adeyemo, the petitioner (rtd).

In his statement to the EFCC, Adeyemo claimed to have received a call from a man going by the name of Ojo.

According to Ojo, who claimed to have known him for years, his son started a divorce procedure in the US and wanted to sell his properties to keep them from going to his wife.

According to Adeyemo, Ojo asked for his help in order to receive the money, which came from the sale of his son’s American assets.

He was informed by the suspect that the money will arrive from the US via Loomis International in New York.

Before he could receive the specified amount, Ojo added that a code will be supplied to him, which he would need to produce.

Adeyemo got a second call asking him to pay $5,700 in “processing fees” before he could get the money.

The retired military officer alerted the EFCC to the situation because he thought Ojo was up to no good.

The suspect was apprehended by the agency as he prepared to give the petitioner bogus money worth $17.5 million. He will shortly face legal charges.