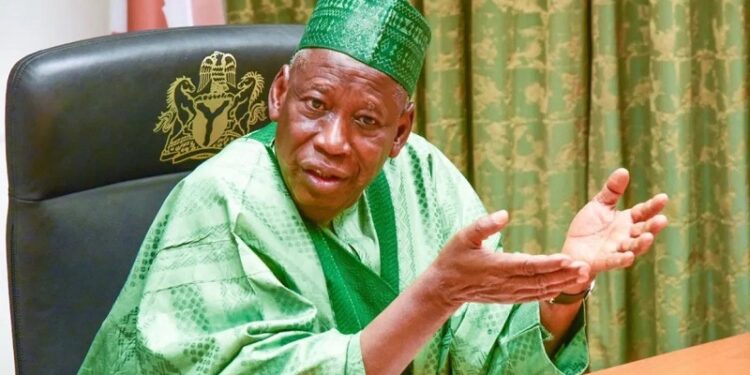 Governor Abdullahi Ganduje of Kano State has attributed the challenges of nation building in Nigeria to the faulty foundation laid by the colonial masters.

Ganduje made the assertions at the launching of N250 million Dr Abdullahi Ganduje Lecture Theatre and Award on Saturday at the University of Ibadan.

The News Agency of Nigeria reports that Ganduje, who was the Guest Speaker, bagged the Most Distinguished Alumni Award.

The governor said that the faulty foundation laid by the colonial masters was purely done to actualise their interests and not for any genuine development of the country.

“The challenges of nation building in Nigeria are attributable to the very faulty foundation laid by the European colonial masters.

“These were purely done to actualise their interests and not for any genuine development of the country,” he said.

Ganduje said that the colonial rule divided Nigeria into North and South without much concern for the peculiarities of the two regions.

He said that the division was without concern for the difference in land tenure systems, local government administration, education and judicial systems.

Ganduje said the challenges of nation building should be a matter of concern to all, adding that there was need to reflect on the journey so far to build and leave a better legacy for the future.

“From this historical legacy, therefore, regionalism has been a major challenge to nation-building in Nigeria. Under these conditions, it was easy for prejudice and fear to thrive.

“Nation-building is about building a common sense of purpose, sense of shared destiny and collective imagination of belonging.

“Nation-building is about building the tangible and intangible threads that hold a political entity together and gives it a sense of purpose,” he said.

The governor said that the nation’s founding fathers tried to deal with the challenge by adopting federalism and advocating policy of unity-in-diversity.

According to him, the lack of consolidation of Nigerian federalism around commonly shared values and positions continue to undermine our efforts at nation-building.

“This could be seen in the division between ‘indigenes’ and ‘settlers’, which has been a source of domestic tension and undermined our efforts at creating a common nationhood,” Ganduje said.

He urged Nigerians not to see themselves as victims of their history, but be more responsible to overcome the challenges posed by their history.

Ganduje said leadership was a critical factor in nation-building, adding that it has to do with personal qualities of integrity, honesty, commitment and competence of individual leaders.

“Leadership is a critical factor in nation-building that has to do with personal qualities of integrity, honesty, commitment, and competence of individual leaders at the top. “And the collective qualities of common vision, focus and desire for development of the elites as a whole,” the governor said.

He said that was the reason why the nation must have a leadership that is committed to the rule of law, has  demonstrable sense of fair play and democratic tolerance.

“Another important aspect of nation-building is the building of a common citizenship. “A common nationhood cannot be achieved while citizens are living such parallel lives.
Nations are built by healthy and skilled citizens.

“On grounds of both equity and efficiency, we need to promote the access of the bulk of the Nigerian population to basic education, health and housing,” Ganduje said.

The governor added that Nigeria needs a social contract with its citizens as a basis for demanding loyalty and support. “Leaders must raise governance standards by cultivating the culture of good governance,” he said