BAT Is The Man

The song “BAT Is The Man” , which is a masterpiece of 23 Legends is a team song released towards the 2023 presidential election. 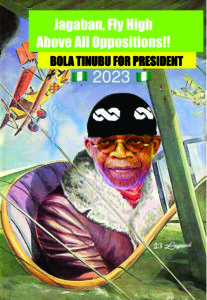 BAT Is The Man is indeed capable of rallying the entire Nigerian youth together on the side of BAT. It is a song that X-rayed the times and life of Sen Bola Ahmed Tinubu popularly called the Jagaban of Borgu Kingdom.

The 3min 29s track  composed by Magxda (Eislar Kawuche) has been hitting the social media circle since on the 21st January, 2022 and is due for official released in Lagos and Abuja in February 2022.

‘BAT Is the Man’ is more than a song!

The lyrics of the song 👇🏿

BAT Is The Man

1,
Every Man Is Given A box Of Tools
In A Jumbled Mass n Book of Rules
And Each Must Make Before Life Is Spent
A Stumbling Block or A Stepping Stone

2,
He Spent His Entire Life Helping People
As He Believes In Humanity
Even When They Bite(the)
Fingers That Feeds Them
HE still Welcomes Them
The Second Time…..

Bola Ahmed Tinubu Is The Man
If You Dont Gerrit, Neva forget it, Gerrit Now
He Is A ’23 Legend’