Amid increased calls that election results should be transmitted electronically, the Senate on Tuesday bowed to pressure and gave the Independent National Electoral Commission (INEC) the sole power to determine the mode of transmission of results. 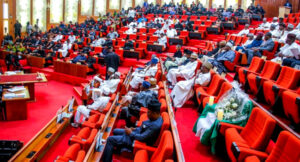 This followed the reversal of the Senate’s earlier decision that INEC may consider the electronic transmission of results “provided national [network] coverage is adjudged to be adequate and secure” by the Nigerian Communications Commission and approved by the National Assembly.

Under a new amendment of Clause 52 (2) of the Electoral Act Amendment Bill, the Senate resolved that “voting at an election and transmission of results under this Bill shall be in accordance with the procedure determined by the Commission, which may include electronic voting”.

The move was part of decisions taken by the Senate when it passed a bill to re-commit some clauses in the Electoral Act Repeal and Re-Enactment bill which was earlier passed separately by the Senate and House of Representatives.

Presenting a motion for the changes before the Senate, Majority Leader, Yahaya Abdullahi, said after a critical examination of the Bill by the Senate Committee on INEC, some fundamental issues were observed which required fresh legislative action. He listed the clauses that required action as 43,52,62,87.

Section 87 deals with the method of primaries to be adopted by political parties.

The Senate had earlier adopted during the amendment of the electoral act that parties should adopt either direct or indirect primaries.

However, based on the observation by its INEC Committee, the lawmakers supported direct primaries while some others did not.

Senator Adamu AlIero argued in favour of direct primaries, saying that it will strengthen and deepen democracy and will make the electoral process transparent.

According to Senator Adeyemi, indirect primaries is better for the country because the majority of party members are illiterate and they will need enlightenment if they are going to be asked to come out and vote. He added that indirect primaries are cheaper to conduct.

After the debate, the majority of lawmakers voted in favour of direct primaries and it was adopted by the Senate.