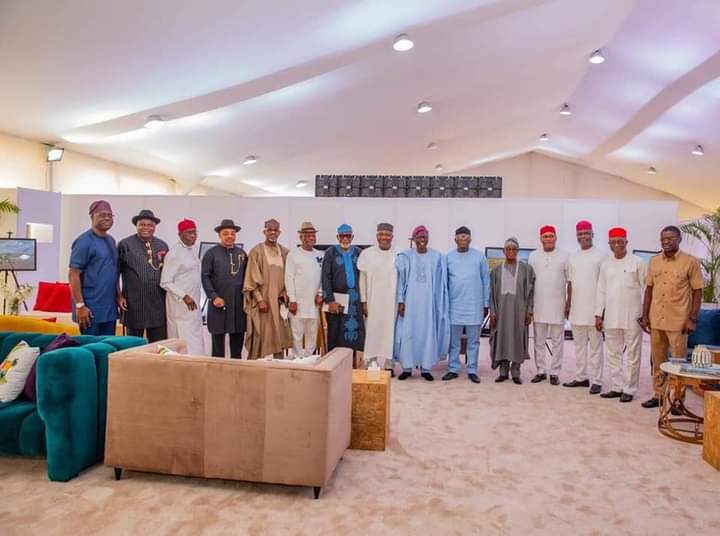 Ahead of the 2023 presidential election, 17 governors from Southern region states led by their Chairman, Southern Governors’ Forum (SGF), Oluwarotimi Akeredolu, have toughened discussion on need for South to be the zone that would be producing Nigerian next president after President Muhammadu Buhari completes his tenure, indicating that for equity and fairness to prevail, the region must be allowed to produce Buhari’s successor.

The governors, who argued that their stance was made based on politics of equity and fairness, stated that for the unity of Nigeria, the presidency must be rotated between Southern and Northern regions, saying since the incumbent was from the north, the south should be allowed to produce next president.

According to the governors, they were not concerned if the next president comes from any of the political parties including the Peoples Democratic Party (PDP) and the All Progressives Congress (APC), but their major interest remains that President Buhari’s successor should emanate from the southern region of Nigeria.

To ensure fairness during the next presidential poll, the 17 governors reject removal of the Electronic transmission of election results from the electoral act and the confirmation of exclusive jurisdiction in pre-election matters on the Federal High Court across the country.

Although, the Governors of Cross River and Anambra States, Prof. Ben Ayade and Willie Obiano, were absent at the meeting, 15 others were either present physically or represented by their Deputy governors.

Rising from the forum’s closed-door meeting held at the State House in Lagos on Monday, Akeredolu, who spoke for his counterparts, declared that before September 1st, 2021, they would have promulgated anti-open grazing laws in their various states in other to end the persistent face-off between farmers and herders across the region.

READ ALSO:  Nigerian begs for his life if Brother or Nigerian govt fails to rescue him by tommorrow

Aside from that, he noted that they have also aligned with the House of Representatives on the proposed 5 percent oil revenue to the host community and rejected the Senate’s recommendation of 3 percent in the Petroleum Industry Bill (PIB), describing the upper chamber’s suggestion as inappropriate.

Speaking on behalf of his counterparts, Akeredolu, who read the communique issued after the meeting, disclosed that selective criminal administration of Justice was discussed during the meeting and that they concluded arrests by law enforcement agencies should be made within the ambit of the Law and that fundamental human rights of every Nigerians be respected.

He noted that they also conclude that before security institutions undertake an operation in any state, the Chief Security Officer, who is the governor, must be duly informed and that funds deducted from the Federation Account for the Nigeria Police Security Trust Fund (NPST) be distributed between Federal and State governments to combat insecurity.

The governors’ demand came barely three days after Directorate of State Security (DSS) stormed the home of Yoruba Nation agitator, Sunday Adeyemo, popularly called Sunday Igboho, without alerting the governor before embarking on the arrest that later led to clashes between the law enforcement officers and Igboho’s loyalists which claimed two lives.

On the PIB recently passed, the chairman, who commended the National Assembly for the progress made in passage of PIB, kicked against the proposed 30 percent share of profit for the exploration of oil and gas within the South-South region.

“We also rejected the ownership structure of the proposed Nigeria National Petroleum Company Limited (NNPC) and our demand is that the company be vested in the Federal Ministry of Finance”.

He explained that the forum concluded that the ministry should hold it in trust for Nigeria Sovereign Investment Authority (NSIA) since all tiers of Government have stakes in that vehicle.

#Grassroot Developments: Where Did This Zulum Emerge From? Adesina