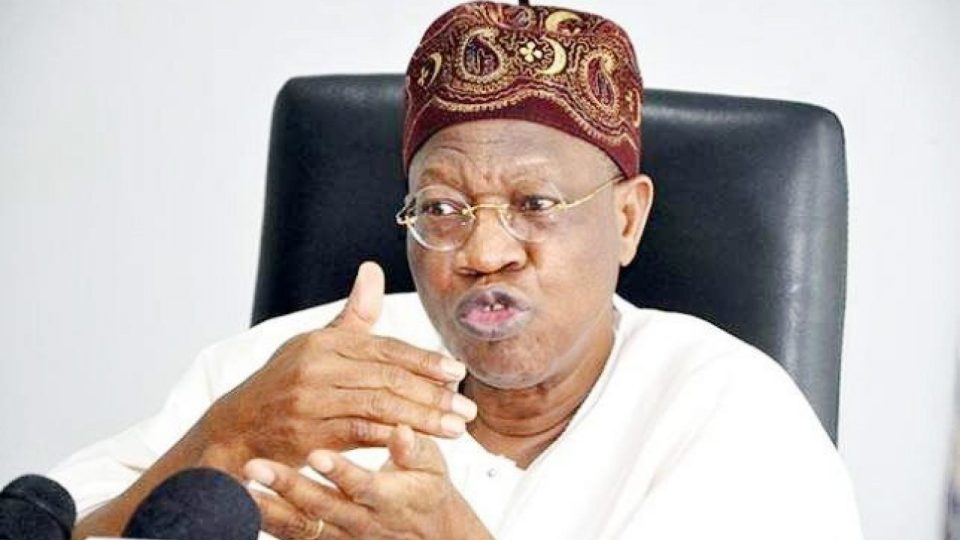 Minister of Information and Culture Alhaji Lai Mohammed, on Tuesday, said that Nigeria as a sovereign country cannot be ruled by either the policies or laws of a multinational corporation no matter “how powerful” it may be.

He said that Nigeria also has a responsible to protect national security.

The Minister spoke at an interactive session with the members of the House of Representatives’ Joint Committees on Information, ICT and Justice, probing the circumstances of the suspension of Twitter operations in Nigeria.

It will be recalled that the Federal Government of Nigeria early this month suspended the activities of Twitter, citing national security as its main reason.

The suspension, however, came barely 48 hours after the microblogging platform deleted a tweet by President Muhammadu Buhari, in which he warned the terrorist Indigenous People of Biafra (IPOB) members who had been ambushing soldiers, killing them and other security officers and destroying setting police stations and prison facilities on fire, setting inmates free as well as carting away weapons, thereby imposing insecurity on the South East of the country under the disguise of secession.

Twitter surprisingly was ostensibly orchestrating the successful outing of the terrorist group as it allowed their inciting tweets to continue but deleted those of the President, government or any Nigerian who did not align with IPOB’s destructive posts that were also equally causing crisis and death in parts of the country especially in South East and Rivers State.

Because any serious country must not allow such to continue as it has responsibility to secure its land and people, Nigeria’s Administration of Muhammadu Buhari told the microblogging social media networking platform “enough” but it failed to heed the warning of authorities and the power in the land descended on it, The DEFENDER recalls.

Surprisingly, a public outcry that ensued came mainly from political elites especially one particular senator that is senate minority leader, lawyers, journalists, many leaders of the same South East where IPOB imposed insecurity had already led to panic with calls flying to President Muhammadu Buhari to rise to the situation with a view to ending the insecurity. The opposition Peoples Democratic Party (PDP) was also chief in the terrorism backing and standing against government over the action taken against Twitter to safeguard the sovereignty of the country.

The media among the anti-state in the outcry were creating the impression that under 24 hours of the Twitter ban, Nigerians had lost N2 billion, a joker bought by Governors of Oyo and Benue states, Seyi Makinde and Samuel Ortom, respectively, who described the action of the government as illegal and they threatened to continue the use of the platform in disobedience to the directives of Federal Government.

Amnesty International had also launched a petition and was gathering signatures to push for Nigeria to lift the ban on Twitter’s operations as if it thinks that the country is a pushover and not the sovereign nation that it is, The DEFENDER was told by an angry citizen.

He said: “What they, especially opposition PDP and Amnesty International wanted to do was for America, Europe and United Nations to take a common stand and impose sanctions against the Nigeria, forgetting that the man in power is Muhammadu Buhari, who has finally recovered the dignity of the entity and restored Nigeria to its rightful position in the comity of nations. They will be the ones to come begging.” He said.

READ ALSO:  #Easter From Obasa: We Must Not Allow Peace Elude Us

The revealing hypocrisy in the public outcry, notwithstanding, the House of Representatives mandated the joint Committees on Information, ICT and Justice, to investigate the matter.

Appearing before the Joint Committees chaired by Hon. Odebunmi, Alhaji Lai Mohammed said that the action of government was within the extant laws of the land and he presented the notes on the legality of the ban of the Twitter operations and insisted that they stand banned in Nigeria until they register with the nation’s Corporate Affairs Commission (CAC) and begin to be seen as doing business employing, paying taxes in Nigeria and then also abide by the rules of doing business in the land.

The Minister added that Twitter was not registered in Nigeria and so does not pay taxes as well.

He said: “Who is Twitter? We are talking about a sovereign country. Nigeria will not be ruled by the laws of a multinational, no matter how powerful it is. So, for us, why did we act now? There is no time we took the decision that we will not have the kind of reaction we have now. But it has gone to a stage after a persistent appeal to Twitter, and we saw how policemen were being killed, soldiers and we said enough is enough. We owe no responsibility to Twitter. It’s not registered in Nigeria. It does not employ any Nigerians or pay taxes. There are other platforms available to Nigerians to make money.

“I know it’s true that many Nigerians have accused the FG of an attempt to stifle the media and the free speech and we say no at all. There is absolutely no intention on the part of the government to stifle free speech or the media because as you will see, why it is true that section 37, 38, 39, 40, and 41of the constitution actually provide for freedom of speech, but it is actually qualified by Section 45 of the same constitution.

READ ALSO:  2023 & SW Successorship: Tinubu Looked Unstoppable Before He Got Into Politics - Akinyelure

“Hon. Members, like I, said the only reason we suspended the operation of Twitter is that it was promoting disunity in Nigeria and it became a national security risk. As you can see the provision of the constitution leaves no one in doubt that the provisions on freedom of expression are not absolute.

“This is a case where the federal government deemed it necessary that the activities of Twitter in Nigeria were inimical to the stability of the country.

“Hon members, may I remind you that during the unfortunate #EndSARS# protest, the same played a very unsacred role by making available its platform to retweet, not just the retweeting the messages of EndSARS protesters, but raising funds for the EndSARS protesters before it was hijacked by hoodlums. And Nigerians have forgotten that this particular EndSARS protests led to the death of 57 civilians, 37 policemen, 6 soldiers, 243 properties destroyed, 200 brand new buses belonging to Lagos State government, 83 warehouses were vandalized and yet Jack Dorsey crowd-funded the activities. That’s I said that the Twitter mission in Nigeria is suspect.

“Hon. Members, we all know that IPOB is proscribed by the high court of law in Nigeria and yet it is a platform of choice through which IPOB directs its people to kill soldiers, policemen, to burn correctional centers. So both in practice and common law, we had to suspend their operations.

“I will round up by even the position of Companies Allied Act also supports the suspension of Twitters operations in Nigeria because the primary laws governing businesses in Nigeria is the Companies and Allied Matters Act 2020. Twitter is not licensed in Nigeria.

“We are within the law to suspend Twitter. Our position is also supported by cyber space security act.

“Article 19(2&3) of the International convention on civil and political rights of the Cyber crimes prohibitions act empowers the federal government of Nigeria to regulate and promote the security of the Nigerian cyberspace.

“Yes, we have taken into consideration Nigerians doing business on Twitter. It is because there is a country called Nigeria that people can do business on any platform. And this is very fundamental. There are other platforms. Facebook, google, WhatsApp for people to use. But in a matter of national security, individual interest will lag behind.

“We said the doors are not banned. We are ready to speak with twitter. Twitter has written a letter seeking for government dialogue and just today, I issued a statement which I announced the government team that is ready to meet Twitter chaired by my humble self with the Minister of Justice, Communication, Works and Housing, Labour and some agencies of government. We hope that the Commitee will move fast and have dialogue and understanding with Twitter.

“The OTT must be registered as Nigerian companies after which they will be licensed.”

The minister however hoped that the face-off will be resolved soon.

“Hopefully, if we were able to resolve this matter quickly, they will resume the use of Twitter”, he said.

According to him, VPN would expose even their bank account and make it vulnerable.

“If any plaftorm does it, we will suspend their operations too because there is country called Nigeria that they can do business”, he said.

In his remarks earlier, a member of the Committee, Hon. Fatihu Mohammed who represents Daura Sandamu Baure federal constituency of Katsina State, while supporting the twitter ban asked Nigerians to jettison social media.

He said “My colleagues have spoken the minds of their Constituencies. If I will speak the mind of my Constituency, I will include the President himself inside because out of 360 of us, I am the only one voted by the president. Let’s put Nigeria first and lets call a spade a spade. The media is at war. We can see what is happening in social media. I have worked in NCC for 10 years. I know what the department, cybercrime. We should please, regulate the media. If that tweet was not brought down, the dirty things will happen in Nigeria will be less than what we are seeing now because if the minister did not ban Twitter by the instruction of Mr. President, the kind of insults the sovereignty of Nigeria will have by the users of tweet will be more dangerous than what we are facing now. Let’s tell ourselves the truth. Nigeria first. Sometimes, I am reading tweets, I am disappointed with the youths and the future.

“I went to a unity school, Federal Government College, Kwali. When south east are coming, we lined up shouting that they are coming with their buses. But that thing is missing. Why are we bringing issues, trying to cause confusion where there is no confusion? It’s just interest. For God’s sake, what is social media? Are we eating social media? Let’s go back to the resources and have it, my brothers. Let’s keep this thing outside and face the real problem we are facing in Nigeria.”

In his speech, the Chairman of the Committee said the investigation was necessary to know the circumstances of the suspension hence the interface with the Minister.

He promised further legislative action on the matter. Defender Newspaper reporting for;