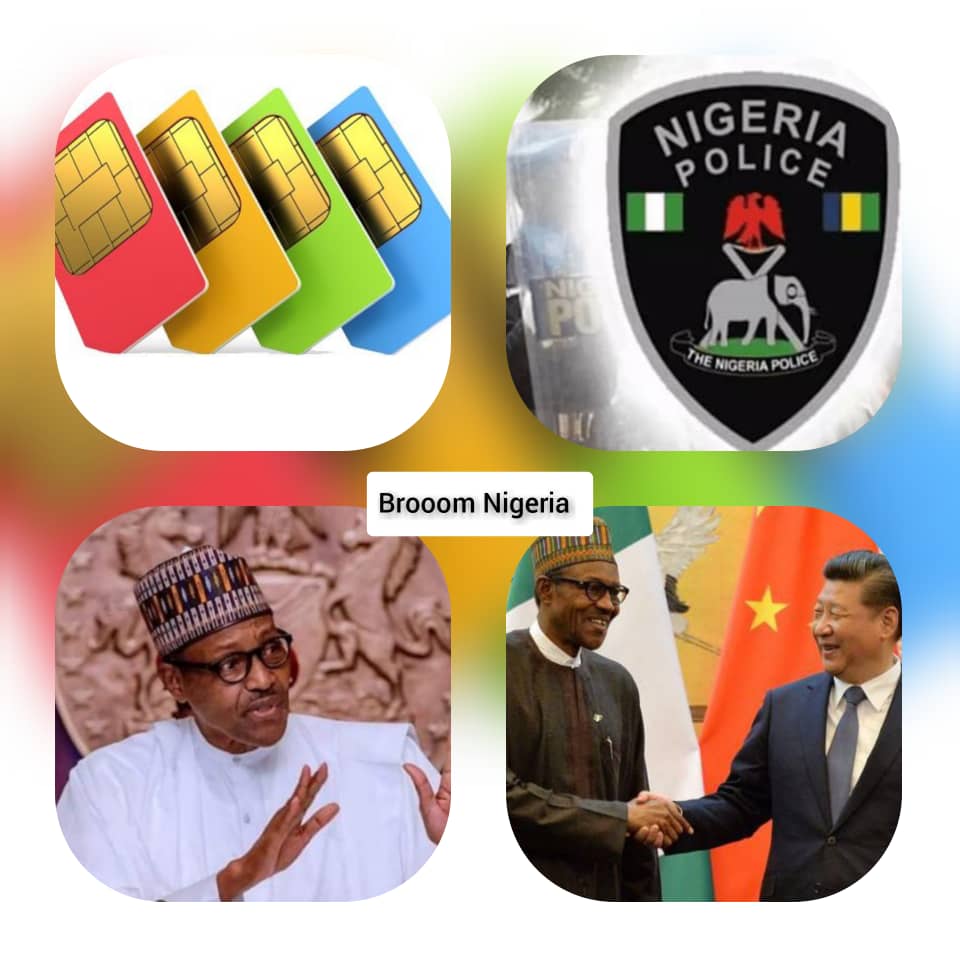 The President spoke at a time the National Space Research and Development Agency, NASRDA, lamented that inadequate satellite and other facilities are affecting monitoring of bandits and other criminal elements operating in the country.

Buhari, who also noted that the synchronisation between NIN and SIM cards will determine the success of the ongoing war against insecurity in the country, spoke at the launch of the National Policy for the Promotion of Indigenous Content in Nigerian Telecoms Sector and Revised National Identity Policy for SIM Cards registration in Abuja.

He said: “NIN will cover one of the weaknesses in our security structure. We will be able to easily identify and know the personality of Nigerians. We will identify people easily, including the crooks,”

President Buhari said proper identification of all Nigerians and legal residents in the country and the ability to conveniently access a database will provide an impetus for more effective planning and security oversight.

“The launch of the Revised National Digital Identity Policy for SIM Card Registration was quite timely and will support efforts to enhance security and develop the economy.

“The National Identification Number is the foundational digital ID for the country; both Nigerian citizens and legal residents are expected to obtain the NIN. It will provide access to government services and give government useful insights that will enable us utilize scarce resources in a more efficient way,” he said.

According to him, the first National SIM Policy was launched in February 2020, while the revised policies are in full alignment with the objectives of the administration in the areas of economic development, security, and anti-corruption.

He said: “The digital economy sector has made significant progress and recorded a number of unprecedented achieve-ments since we expanded the mandate of the Ministry of Communications to include the digital economy mandate.

“The Information and Communications Technology sector was the fastest growing sector in both the fourth quarter of 2020 and the entire year 2020, based on the Report by the National Bureau of Statistics.

“The sector’s 14.70 per cent double-digit growth rate played a principal role in supporting our country to exit the recession triggered by the COVID-19 pandemic. The growth rate of the sector exceeded four times the next fastest-growing sector of Q4 2020, the ICT sector which had a growth rate of 3.42 per cent. This is truly commendable.”=

The President said the digital economy sector provided online options for activities hitherto restricted to offline channels while minimizing the disruption to activities of both public and private sectors and reducing the cost of meetings.

He added that the National Policy for Indigenous Content in the Nigerian Telecommunications Sector was in line with the administration’s commitment towards ensuring that Nigerians become active participants in the different sectors of the economy, including the telecommunications sector.

“The Federal Government embraced institutionalizing online meetings through the approval of the National Policy on Virtual Engagements in Federal Public Institutions.

“As a result of this, we now have virtual Federal Executive Council, virtual Council of State and virtual National Economic Council meetings, among others, even though this development was triggered by COVID-19.

“As a country, our desire to produce what we eat, and consume what we produce is not limited to the literal meaning; rather we want to work towards being self-sufficient in every sector of the economy.

“For the telecoms sector, we want Nigerians to play a major role in the design and manufacture of devices, in meeting the manpower requirements and in becoming an active part of the telecommunications ecosystem of the country.

“The policy aims to achieve this and I have earlier directed the Minister of Communications and Digital Economy, Dr Isa Ali Pantami, to develop the structure for its implementation and forward this to the Nigerian Communica-tions Commission to implement.

“We are confident that the execution of the policy will further enhance our economy and lead to the creation of jobs,” the President noted.

He said there had been many futile attempts to promote the use of digital identity in the past, noting that “previous attempts have been unsuccessful due to a number of reasons, including sabotage.

“Our focused approach shows that this administration is dedicated to ensuring that we derive the benefits of a secure and robust digital identity system.”

He assured that his administration was fully committed to the safety of Nigerians and that linking the SIM to NIN will significantly enhance security, aid in national planning and budget preparations.

In his remarks, the Minister of Communications and Digital Economy, Dr. Pantami, appreciated the President for the continuous support to the telecoms sector, including regulators and operators, thanking him for the keen interest in ensuring that the security sector got a boost with more information on Nigerians and legal residents.

The minister noted that the NIN registration had recorded a huge success with 54 million Nigerians already captured in the process, adding, “within six months, over 12 million enrolled.”

He said it is possible to have virtual ID cards that could be used in various transactions, assuring that the NIN and SIM card registration for Nigerians and legal residents will cover 99.9 per cent.

He added that the buoyancy of the telecoms sector had given Nigeria many leadership roles in international organisations, listing the impact on education, training, health and welfare of many, including the establishment of 600 computer centres, and a world class SIM card manufacturing company in the country.

Meanwhile, the National Space Research and Development Agency, NASRDA, has said that inadequate satellite and other facilities were affecting monitoring of bandits and other criminal elements operating in the country.

The newly appointed Director-General of the Agency, Halilu Shaba, disclosed this in an interactive meeting with staff of the agency in Abuja, said the bandits had become sophisticated in their operations, adding that waves received by the agency from remote areas showed that bandits no longer use Global System for Mobile Communication, GSM, phones, but walkie-talkies.

“Satellite is not static where the insurgency is taking place. That is why one satellite is not adequate. What Nigeria has are two satellites doing two different things.

He called for collaboration between the agency and security agencies in the country in the area of information sharing, especially when planning to launch attacks on the criminal elements.

However, experts in satellite business have punctured the argument, saying that it does not take a million satellites to monitor the activities of bandits in a country that has two quality communication satellites in orbit.

Some of the satellite engineers who spoke to Vanguard on condition of anonymity said that Shaba could be excused if he had made case for adequate earth stations in the country to properly read the satellites in orbit, rather than inferring that two satellites are not enough to monitor a handful of bandits terrorising different parts of the country.

Earth station antennas are at the earth end of satellite links. High gain is needed to receive the weak signals from the satellite, or to transmit strong signals to the satellite.

One of the experts said: “This man should say something else. I wonder if the D-Gs of today are properly grounded in the fields they are asked to superintend. Does it take a million satellites to monitor bandits?

“What I was expecting him to say is that this government should make investment in adequate earth stations in Abuja and other parts of the country to properly read the satellites, not that the satellites Nigeria has was not enough.

“Yes, additional satellites are good for back-up but not necessarily for the exclusive reason of adequately tracking bandits. People should put issues in perspective.”

It will be recalled that on December  19, 2011 NigComSat -1R, Nigeria’s replacement communications satellite, was successfully launched into orbit. NIGCOMSAT-1R is the replacement for NigComSat-1, which was de-orbited due to malfunction of Solar Array Deployment Assembly, SADA, on November 10, 2008.

Former President Goodluck Jonathan, in whose administration the launch happened, described the launch as another great step forward for the country towards the development of a modern, knowledge-driven society.

In his congratulatory message to the nation for a successful communications satellite launch, Jonathan said Nigeria had kept up with the time-frame of activities contained in the country’s 25-year National Space Development Road-map. The satellite was built and hoisted by China Great Walls Industry Corporation, which in collaboration with their insurance companies, committed to build a replacement satellite for Nigeria at no additional cost. The launch of the new satellite was on a Long March 3B, LM-3B, launch vehicle from Xichang Satellite Launch Centre located in South West China, as the spacecraft entered the predefined orbit of perigee being 200 km, apogee 41,991 km and inclination 24.8. NigComSat-1R spacecraft is built on Dong Fang Hong 4, DFH-4, satellite bus developed by China Academy of Space Technology, CAST, and launched by LM-3B launch vehicle developed by China Academy of Launch Vehicle, CALT. While China Satellite Launch Tracking and Control General, CLTC, will be providing tracking, control and ground segment support for the programme, there are about two ground stations located in Abuja Nigeria, and Kashi, China.

Jonathan agreed that the new satellite, paid for by the insurance policy on the de-orbited NigComSat-1, will have a positive impact on national development in various sectors such as communications, internet services, health, agriculture, environmental protection and national security.