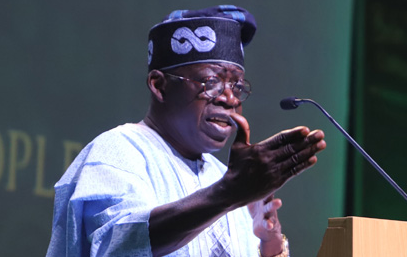 National Leader of the All Progressives Congress (APC) Asiwaju Ahmed Tinubu has appealed to well-meaning Nigerians to unite in the fight against bandits.

He said the battle against bandits and other criminals require a united front to save the nation from disintegration.

The former Lagos Governor said it was time for Nigerians to decide “whether to give the truest meaning to our national motto “peace and unity” or we allow the agents of destruction and merchants of violence to have their way with us”.

He spoke after being awarded an honorary Doctorate degree in Management by Federal University of Agriculture Makurdi on Saturday. 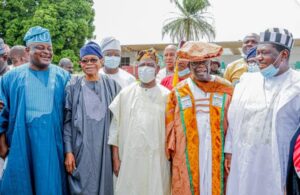 He lamented “terrible people and strong forces want to break Nigeria’s appointment with its greater destiny.”

These people, he said, “have unleashed terror and violent criminality against Nigerians”.

He said by attacking agricultural players across the nation, these “terrible people seek not only to ravage the agricultural community but to visit misery on the rest of the nation through food scarcity and food costs that poor people can simply not afford”.

“These mean forces seek to impose a food production and distribution crisis on us by disrupting strategically important agricultural areas and activities”. 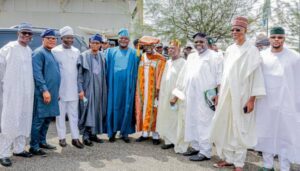 He said: “We must decide whether our farmland and grazing areas are to be battlegrounds, or they are to return to their role of feeding the nation.

“This is where committed Nigerians of all stripes and vocations must join in peace and unity.

“Whether city or rural dweller, whether farmer or herder, we must join in common cause against the real enemies that we face: the terrorists and bandits who attempt to pull us apart.”

To take the country back from terrorists and reverse food scarcity, Tinubu said: “Good Nigerians must stop fighting each other so that we can present a unified front against the common violent threat.

“The military must begin to revise their strategies so that agricultural communities are better protected”.

This, he said, “will enable higher food production, thereby reducing hunger and poverty”.

He called on government to “work with local communities to establish farm cooperatives that will increase mechanisation of agricultural production”.

The cooperatives, he said, “should be structured in a way to finance more productive farm equipment, which cooperative members can use on a time-share basis”.

Those honoured with him were Central Bank of Nigeria Governor (CBN) Godwin Emefiele; Minister of State for Petroleum Resources, Timipre Sylva and Vice Admiral Murtala Nyako (rtd). The Nation reporting for;

#Projects Nigeria: Igbos Will Lose More If Our Country Breaks Up – Okorocha

#Projects Nigeria: God Will Disappoint Those Terrorising Our Country – CAN