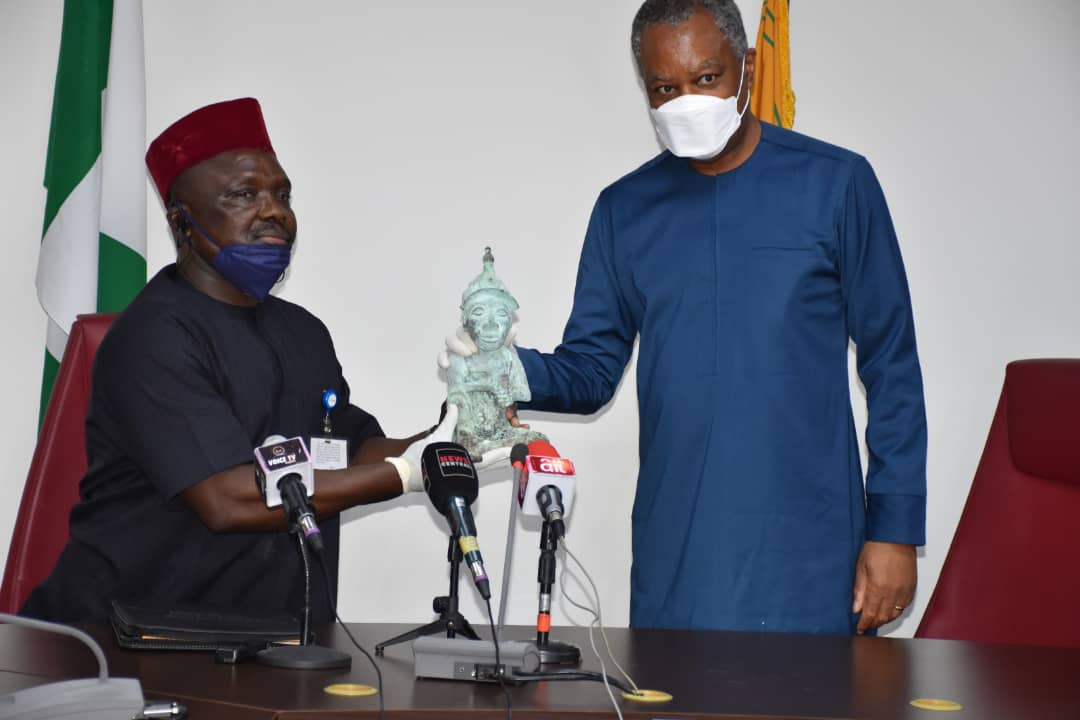 The Federal Government of Nigeria in its committed efforts towards exploring diplomatic and institutional channels in retrieving stolen priceless artifacts today, 8th April 2021, received one of such stolen artifacts intercepted in Mexico City, Mexico. 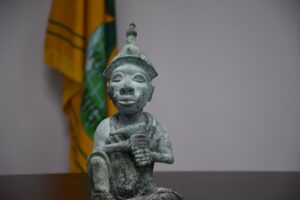 The Honourable Minister of Foreign Affairs, His Excellency, Geoffrey Onyeama, while receiving the artifact from the Charge de Affaires of the Nigerian Mission in Mexico, Dr. Yakubu Dadu, stated that the government remains unswerving in ensuring that the cultural artifacts stolen from the country and scattered in different parts of world are _recovered and_ returned.

Officials of the National Commission for Museums and Monuments were present at the event. 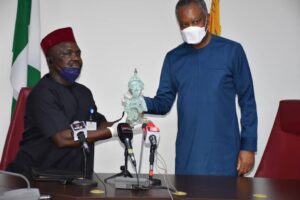 The recovered sculpture is of a man sitting cross-legged, wearing a headgear and holding an object. It has been confirmed to be an ancient sculpture that originated from Ife, Osun State, South-West Nigeria.

According to Mr. Onyeama the process of recovering the valuable cultural possession commenced in 2017, when the former Nigerian Ambassador of Nigeria to Mexico, Ambassador Aminu Alhaji Iyawa, _incidentally_ saw a bronze head suspected to be of Nigerian origin at the Benito Juarez International Airport, in Mexico City. 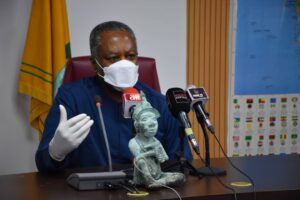 Upon further enquiries and with the collaboration of the Federal Ministry of Information and Culture and _relevant_ Mexican focal institutions, it was established that the bronze head originated from Nigeria.

Following concerted efforts of the Mission together with the joint efforts of the customs of Mexico and the United States, the bronze head was impounded and handed over to the Nigerian Mission by the Deputy Foreign Minister of Mexico, Ambassador Julian Ventura, in a historic ceremony, on 25th February 2020.

Beyond the national value to Nigeria, the bronze figure is an objects of iconic cultural, traditional and religious importance to the Yoruba people, as well as a critical part of their history and heritage resources.

The Ministry of Foreign Affairs urges all well meaning Nigerians and friends of Nigeria to notify relevant agencies of artifacts suspected to be of Nigerian origin where they find any such, as the present government is willing to engage and return such priceless assets.