2023 & Southern Nigeria Successorship: Tinubu Has All It Takes To Govern Nigeria- Afenifere 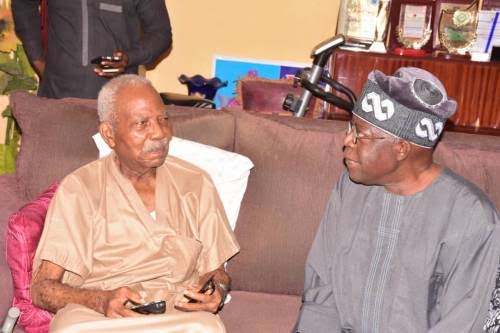 Ahead of the 2023 general election, Leader of Afenifere, Chief Reuben Fasoranti has described the national leader of APC, Asiwaju Bola Tinubu has all it takes to govern Nigeria.

He said “ Tinubu will have my total support. With all his had done in the country, his activities and his track record,he deserves to be President, I know him very well and he can do it,” Fasoranti said.

He has my total support.
Judging from his performances and activities, he is the one that can do it. Our prayer is that ,God will make him realize his vision and all prayers for him will be granted.

All your efforts on him will not be in vain. If he becomes the President of this country, he will not disappoint Nigerians.”

The group had earlier paid homage to the palaces of Abodi of Ikale land and Osemawe in Ondo town.

In a remark,the Coordinator and Chairman of the group in the Southwest, Senator Dayo Adeyeye called on the people the southwest to speak with one voice and support the candidature of Tinubu ahead the poll.

Adeyeye said Southwest had been supporting Northerners in past elections hence the need for the people of the North to support the Southwest to be the successor of president Buhari.

According to Adeyeye, the only way the Southwest could  get it right was to support the candidature of Bola Tinubu come 2023 Presidential election in other to restructure the country.

“Yoruba still want to be President and the only way we can get it right now is to pick and support Asiwaju Bola Tinubu and that is why we have started the consultation and campaign earlier.

“Tinubu is a leader who transforms nothing into something and feeds his people from the riches of what has been so transformed.

“In his time as Lagos state governor, staff salaries, developmental projects, philanthropic activities never stopped. He has been developing people and he will continue to do that,” he said.

Adeyeye, who was a former Minister, explained that the group was formed to consult for Tinubu, ahead of the 2023 presidential election.

He said that Tinubu is highly experienced as a  leader with the required political qualities to take over from where President Muhammadu Buhari would stop in 2023.

The Abodi of Ikale land, Oba George Faduyile said Tinubu was a reasonable leader who could rule the country urged that the Northerners should also rally support for Tinubu.

He said, “We have to be in the mainstream of Nigeria politics, Tinubu is the best candidate we can pick in the Southwest. He has the charismatic and he has all what it takes to rule this country. We need him to restructure our country.”

Oba Faduyile, posited that no traditional ruler in the six geo-political states could go against the candidature of Tinubu.

He, therefore, promised to support the ambition of Asiwaju Bola Ahmed Tinubu ahead the poll saying he has made people across the country.

Speaking in the same vein, Oba (Dr) Victor Kiladejo, the Osemawe of Ondo Kingdom, prayed that God will take Tinubu to the position.

According to him, if Yorubas could speak with one voice and be united, the, Tinubu presidential ambition would come to reality.

#Youths in Politics: Participate to Save Nigeria from Collapse – Metawalle