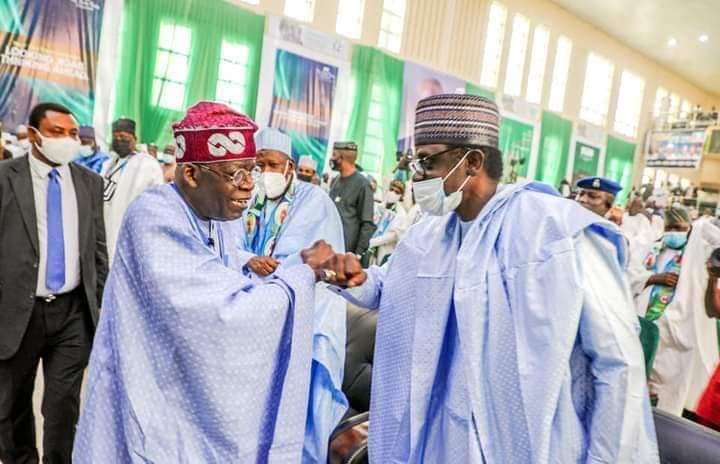 JAGABAN BORGU AT 69 AND 2023 RACE TO PRESIDENTIAL VILLA

UNTIL he was installed the Jagaban Borgu Kingdom (New Bussa) in Niger State by the Emir of Borgu, Alhaji Haliru Dantoro III, little was known of the significance of the chieftaincy title. Senator Bola Ahmed Tinubu (BAT), Governor of Lagos State (1999-2007) and previously a senator of the Federal Republic became the ‘Leader of Borgu Warriors’ and ever since, the title has assumed national prominence and subdued to the background, other chieftaincy titles bestowed on the irrepressible politician.

For whatever reason, BAT prefers this tittle to others and analysts are yet to exactly know the reason. It may be political. It may be developmental. It may be social. It may be emotional. It may be what you think. It may also be what I think. So many speculations! In any case, it is the holder of the title that should know, even if we are not told and we are just left to be conjecturing. However, BAT’s 69th birthday is providing an insight to what many of us have been speculating.

Monday, March 29, 2021 was the 69th birthday of BAT, and as to be expected the 12th Colloquium took place in far away Kano with all the trappings befitting the political colossus and the National leader of the ruling party, the All Progressives Congress (APC). Because of COVID-19 pandemic, the event was held hybrid (physical and virtual) with the Coronation Hall of the Government House, Kano serving as the centre. The theme of the Colloquium ‘Common Bond, Our Common Wealth: The Imperative of National Cohesion for Growth and Prosperity’ brought together the major actors in our political milieu. The president, vice president, several governors, ministers, the United Nations Development Programme Resident representative Muhammed Yahya, Executive Director of HoP Africa Dr. Nindir Nansoh, political bigwigs, captains of industry and commerce, traditional rulers, and the media were there to honour this titan.

The celebrant did not disappoint Nigerians as he utilised the event to canvass for what majority of us wanted to hear. He declared: ‘Put stimulus package in place . . . this is no time for austerity.’ Quoting him further, he said, amongst other things: ‘If you hear United States of America spending $1.9 trillion and they are not looking back and still asking for three trillion dollars for infrastructural renewal and for creating jobs when your unemployment rate is about 33% and you ask us to keep on fasting. We are fasting no more. The one we are fasting spiritually is voluntary. We have been fasting for many years. . . . Sovereignty is that of Nigeria and it is only the Federal Government that has the sovereign power and must use it for the benefit, development, health, and quality life of Nigerians, that is why we are sovereign.’

No doubt, BAT was being populist as he strove to appeal and satisfy us, the ordinary people who have been bearing the excruciating economic and social doldrums of the country. For a while now, many had been calling on him to speak up on the situation in the country. I guess the last time he spoke was on the EndSARS national imbroglio.

As a prelude to the 12th Colloquium, BAT had visited Kaduna, Kano, and Katsina, amongst other places apparently to sensitise the northern power brokers! To my mind, this is the beginning of the 2023 marathon race to the Presidential Villa, also known as Aso Rock. Can we blame him? After all, the race cannot be for the chicken-hearted. Albeit BAT is yet to formally declare his intension to gun after the seat presently occupied by President Muhammadu Buhari (PMB), enough machinery has been set in motion to convince doubting Thomass that BAT is the politician to beat in the 2023 race to Aso Villa. I can bet my life that BAT is entering the presidential race.

With this permutation, it is apposite to examine the pedigree or antecedents of BAT vis-à-vis his qualifications or fitness to contest as president of the largest black nation in the world. This examination can definitely not be exhaustive or conclusive. It is hoped it would generate further debates and discussions.

Politically, we must give it to BAT. He has come a long way. After quitting his job at the American Oil giant, Mobil, he dabbled into politics and providentially, he was elected a Senator in 1992 under the banner of the Social Democratic Party, one of the two parties of the political contraption of General Ibrahim Badamosi Babangida. He was quite active in the short-lived Senate. He pitched his tent to defend the mandate of late Moshood Kashimawo Abiola, the presumed winner of the June 12, 1993 Presidential election. He subsequently became a member of NADECO (National Democratic Coalition) which was formed on May 15, 1994 by a broad coalition of our democrats calling on General Abacha to step down and allow MKO to claim his mandate.

He was at a time the go-between for MKO in his discussions with the Abacha-Diya military usurpation. Matters however, went awry and he had to fleed the country. Some analysts postulated that he fled the country because he did not secure what he bargained for with the military junta! He however, returned to the country in 1998 following the demise of General Abacha and the advent of General Abdulsalami Abubakar to participate in the evolving politics.

Despite the odds, he clinched the gubernatorial ticket of the Alliance for Democracy, and he eventually emerged the Governor of Lagos State. He was governor for two terms (May 29, 1999 to May 29, 2007). During his governorship, Lagos State witnessed unprecedented development in all indices of development. Revenue generation was ingenious. As a venerable leader, he mentored and coached many budding politicians who are today, shakers and movers of the Nigerian polity. Some of them are Vice President Yemi Osinbajo, Babatunde Raji Fashola (current minister and former governor of Lagos State), Rauf Aregbesola (former Lagos State Commissioner, former State of Osun Governor, and now a serving minister), Governor Kayode Fayemi of Ekiti State, Governor Gboyega Oyetola of Osun State, and Governor Dapo Abiodun of Ogun State.

He however, fell out with the leadership of the pan-Yoruba socio-cultural group, Afenifere. This could be fortuitous to him as he became the only AD Governor that was returned to office in 2003! To date, there is no love lost between the Jagaban and the Afenifere leadership.

As governor, BAT was accused of using Alpha Beta, the Tax collecting agency of the Lagos State Government to siphon money. Since the allegation was yet to be proved, it remained in the realm of speculation. He was also accused of complicity in the assassination of Engineer Funsho Williams, who was perceived to be his strongest opponent. Again, nobody has been able to prove this allegation. His (BAT’s) Chicago certificate saga, although debilitating, has not been proven. BAT appears to be the political phenomenon of our time who has fought and won many battles to the comfiture of his political opponents.

His legal battles with President Olusegun Obasanjo were unprecedented. He was one governor that gave OBJ sleepless nights. BAT used the instrumentality of law to get out of the cleavages of OBJ’s forces.

BAT was instrumental to the birth of the All Progressives Congress (APC) and the ‘destabilisation’ of the then ruling party, Peoples Democratic Party. PDP will not forget him in a hurry. He is politically suave and sagacious.

If both the two dominant political parties zone the presidency to the southern part of the country, the South-East and the South-South would have tremendous jobs to do to dislodge the candidacy of BAT.

Despite the imperfections of BAT, like all of us, he appears to be the most prepared politician for the presidential race in February 2023, ceteris paribus. To ignore him, is to dismiss our political trajectory. Once, BAT addresses the recurring allegations against him, his presidential political ambition is made of ‘sterner stuff’. Fassy A. O. Yusuf, Ph.D reporting for;