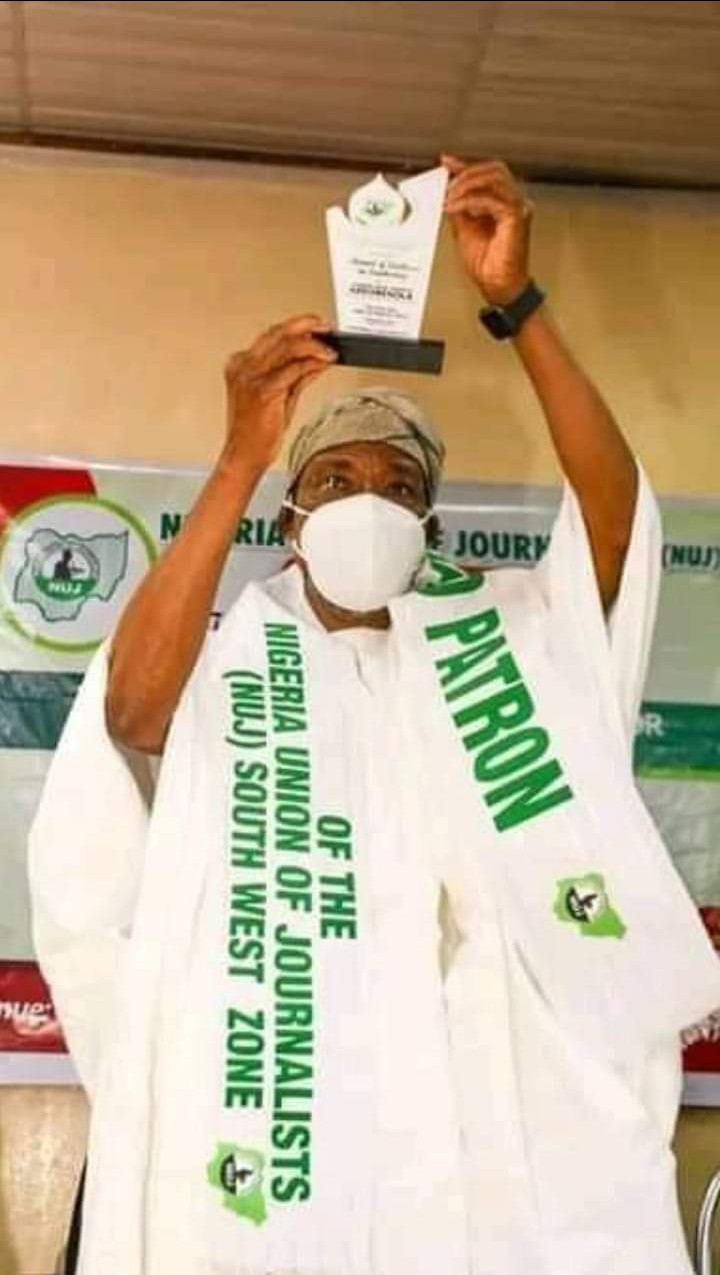 The Nigeria Union of Journalists, Southwest Zone, has today conducted investiture of former Governor of the State of Osun and Minister of Interior, Ogbeni Rauf Adesoji Aregbesola(Oranmiyan) as Grand Patron of the Union today in Ibadan. They Union also conferred meritorious award of excellence on the former Commissioner for Works of Lagos state, Ogbeni Aregbesola.

The Guest Speaker at the occasion, Hon. Yinka Fabowale, who professionally analysed the topic, “Nigeria Media in the Face of Pandemic, maintained that media is indispensable part of government and society. He lauded the immense contributions of press towards fighting COVID-19 pandemic and encouraged them to remain steadfast.

The Deputy Governor of Oyo-State, Engr Rauf Olaniyan described Ogbeni Aregbesola as his brother and mentor. He extolled Aregbesola’s virtues and charged him to remain pro- humanity.

The honouree, Governor Aregbesola in his own remarks, firstly clarified it that he wanted to speak as a Nigerian and Ogbeni Rauf Adesoji Aregbesola. He stated that, “Human being is intrinsically good if he is guided in a good and proper way.

On the roles of media in a challenging situation like ours, Aregbesola said that “wedding together an heterogeneous society of people of different leanings and preferences, is an assiduous task especially in a highly agitated environment but unity, peace and progress can be made by having “Humanity” as a common ground.

Aregbesola quoted American philosopher who said, “democracy anywhere is an unfinished process. “Calling for separation is expensive and may later be disastrous. Many that started war in the past lost many people who are dearly to them without any victory in sight. 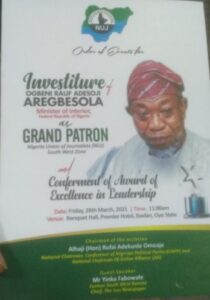 He maintained that discouraging armed struggles is not a cowardice but a pro-humanity and patriotic stand. ” And all of us must kick against war for the love of our people and Humanity in general “.

“War must not be contemplated by any reasonable person. War is destructive, disastrous and bad”, Ogbeni reaffirmed.

He quoted a poem of Chinua Achebe that related to second stanza of Nigerian national anthem which posed the country as mother.
And the first stanza which viewed our nation as our father .

He said either those who were born before independence or after independence, Nigeria is child of every Nigerian because the country will survive, bury everybody.

Aregbesola reiterated that as pro-humanity thinker, it is unethical for him to consider ethnicity as basis for separation. He kicked against sectionalism that may eventually put the lives of people in risk. “As A Pan-Africanist and Black Nationalist, connecting Africans and strengthening it as a single entity and viable platform with conscious leadership is our goal not sectionalism”, he revealed.

“Nigeria represents hope of blacks throughout the world and we must not fail them. Unity of Nigeria is greater than anybody. Responsibility of Nigeria as leader of African nations is not contestable. Nigeria Army have fought to defend African territorial integrity and sustain peace on the continent.

“Rather than to thread path of division, let’s use this period as ample time to focus on unity. When egg is broken, beautiful chick comes out , let’s see our challenging situation as a means of self discovery. We must continue solidifying our unity to lead African space.

“Our roles as individuals are to protect, preserve, promote and advance human dignity”, Aregbesola emphasized.

“War must not be contemplated by any reasonable person. War is destructive, disastrous and bad.

He also stated that, “Criticisms must not be meant to destroy but to uplift and mobilize people for pro-humanity action.

He dedicated the award to the media practitioners who are working consciously to establish an informed society that will transform to progressive society where all members of human race are treated equally and fairly.

’23 LEGENDS’: A Call for More Attention to the Grassroots