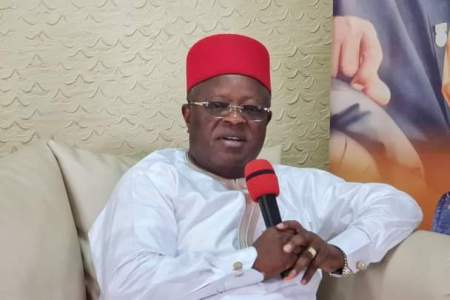 Speaking to Vanguard in Lagos through his Commissioner for Information and State Orientation, Barr. Orji Uchenna Orji, Umahi said the Igbo have had a fair-play under Buhari’s administration in terms of economic and infrastructure development.

According to him, the N10Billion Airport rehabilitation, the 2nd Niger Bridge, the Enugu -Port-Harcourt Expressway and other infrastructures are pointers to the benefits the South East States are getting from the Buhari administration. “These are indications that this administration is helping the South East a lot more than ever.”

He blamed the issue of Biafra agitations on marginalisation of the southeast and urged the Igbo to embrace togetherness of purpose.

Pointing out that the Igbo are republicans, independent and enterprising in nature, he urged the people to embrace togetherness in pushing for a common agenda.

“We must agree that there is strength in unity. Every person in the southeast wants fair-play, wants freedom, wants love and peace, wants harmony and equity. If these are given to every section of this country, there will be more peace, more love and more cooperation.

“Passing through the civil war has made the Igbo more aggressive. But in the midst of these perceptions, we have Igbos that have generosity of heart. They are very hospitable. Infact, the Igbos regard visitors more than any other tribe. While we concede that no tribe is perfect in their perception and conception of things, I want to say that there is nothing wrong with Igbos having different perception of things, but we must know that at the end of every disagreement, there must be an agreement. This is acceptable in a democratic setting.

“We believe in constituted authorities, we believe in establishments. That is why we still have the Federal Republic of Nigeria under the able leadership of President Muhammadu Buhari. We also believe in the leadership of governors and so, our various shades of opinion will not be a barrier to governance.

“The South East has abiding faith in Nigeria as a nation. The labours of our heroes past shall never be in vain. One of our most respected founding fathers, Dr. Nnamdi Azikiwe was in the frontline of championing the cause of one Nigeria, the cause of an independent Nigeria and we cannot for any reason renege from that vision. People express opinions based on a lot of factors.

READ ALSO:  Suicide in Nigeria is fueled by hardship, instability, and brain drain, according to a psychiatrist

There have been issues of marginalisation and under-development. You’d recall that the 16-year rule of PDP did not give the S-East any progress. So, these accumulated issues made people to share different opinions but the majority opinion goes. Our leaders believe in one Nigeria where there is peace and I think it is high time Nigerian government considers the issue of conceding presidency to the S-East no matte the political party. It is important to give everybody a sense of belonging, no matter the party. We should fight for the corporate existence of Nigeria.”

Asked if Umahi is interested in running for Presidency, the commissioner said the governor has not said so.

“ I know the governor does anything when he is inspired. For now, he is content and really saddled with how to deliver the dividends of democracy in Ebonyi State. So far, so good. We have seen in him a man of extra-ordinary ability, a performer, a pace-setter and God’s instrument and a vessel of honour in Ebonyi State. There is a great difference.

Before he came on board, we have no confidence as a people but all that has changed. We were marginalised, denigrated but all that has changed. Today, we have a sense of confidence, a sense of self-worth and self-contentment. That, you can see in the face of every Ebonyian. Everywhere we go, we are proud to say we are from Ebonyi State. That is what is giving our governor joy.

The next thing he will become is in God’s hand. Honestly, if truth must be told, if somebody like Governor Umahi replicates what we are seeing in Ebonyi State in the Nigeria nation, other Nigerian leaders will begin to ask what is happening. Is it a miracle or magic? And I think the time has come for the Nigerian nation not to look at sentiments, not to look at race and tribe but to look at the track-records of the leaders and see that Umahi has the credentials, the stamina, the morale and mental character to deliver in the mandate that will launch Nigeria into the comity of advanced nations of the world.

“I want to say that despite our emotions, despite our sentiments, despite some encounters we must have had in the hands of criminals or bandits, whether they are of herdsmen or of kidnappers, that should not derogate from the fact that we can get criminals anywhere in any part of Nigeria. But essentially, government of every state under this federal system that we operate, including the federal government has a primary responsibility under the constitution to secure and protect the lives and properties of the citizens. That is not negotiable. If any government does compromise that, that government will fail in its responsibility.

Having said that, I want to say that the South East governors are doing very well. In Ebonyi State, we have a strategic blueprint on how to tackle insecurity comprehensibly. On the issue of criminals, we have fortified security and we have put in place necessary facilities to checkmate criminals including making Ebonyi a smart city state whereby CCTV cameras were installed in different junctions in the state to monitor the activities of these criminals. We have also gone ahead to establish a monitoring committee to monitor herders/farmers activities and ensure there is harmony and peaceful co-existence between them.

Over the years, we have had traditional herdsmen in our various states in the southeast. What is important is that when there is any issue of herdsmen and crime committed, we consult with the leaders of the herdsmen to track such incidents and treat them accordingly.

“We have also registered herdsmen in Ebonyi State. We know their locations and we also know possible areas of their operations and when an offence is committed by them, we know what to do to ensure there is no future occurrence of such crime. We have also strengthened our laws involving herders/farmers issue, armed robbery and other things.

“The South East Governors Forum has a committee on security that is developing a template that will have a common application in the states of the southeast. Don’t listen to anybody that says there is a S-East regional security outfit. The constitution on security recommends no regionalism. There is no central body that controls security in a zone.

It is being controlled by the individual governors in the state but there is a central committee aimed at having a clear view, cooperation and collaboration to ensure resolution in the security issues of the zone. That is actually what is happening. As I speak, various states in the Southeast are working on what will enhance security in the states. They have commonality of spirit and intentment and that is the only thing any zone can do.

The NIOB airport rehabilitation, the 2nd Niger Bridge, the Enugu Port-Harcourt expressway and other infrastructures. These are indications that this administration is helping a lot more then ever. And now, the issue of Biafra is a product of marginalisation like I said. However, we must agree that there is strength in unity. Every person in the Southeast wants fair-play wants a freedom, wants love and peace, wants harmony and wants equity. If these are given to every section of this country, there will be more peace, more love and more cooperation.

That is what everybody should be looking for. The office of the president is one thing that will give every zone a sense of belonging. And so, that is what the Southeast is yearning for, for them to have a shot at the presidency. If this is done, that means every tribe has been given a sense of belonging. The Southeast has done it. The South-South has done it but the Igbo have not. When the Igbo have their shot at the presidency, it will help to reduce agitations of marginalisation Biafra and neglect.”