Teachers in Imo State are protesting over 12 months of unpaid salaries in the State while stating that they are not ghosts.

The teachers protested outside the Imo State Government House in Owerri on Wednesday and Thursday. 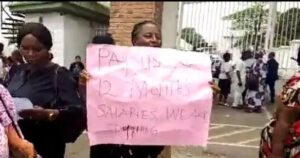 This happened after the Governor, Hope Uzodinma, claimed that teachers who are yet to receive their salaries are ghost workers.

The teachers were chanting; ‘we’re not a ghost oo, we’re not fraudsters’ as they alleged that their salaries were paid last on February 2020, a month after he became the Governor of the State

The teachers also urged the Governor to instruct the accountant general of the State to pay their outstanding salaries.

READ ALSO:  Uncertainty in the South-East in 2023 as politicians are shot at