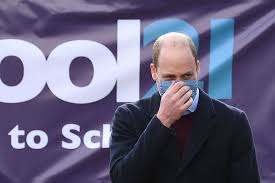 Prince William has said the royals are ‘not a racist family’ as he addressed Prince Harry and Meghan Markle’s claims for the first time.

The Duke of Cambridge was also asked if he had spoken to his brother since the interview. He replied: “No, I haven’t spoken to him yet, but I will do.”

During the interview with Oprah Winfrey, Harry had opened up about the reported rift with his brother William, stating that the relationship was ‘space’ at the moment. He said he hoped things would improve in the future, noting that ‘time heals all things.

He added: “You know, as I’ve said before, I love William to bits. He’s my brother. We’ve been through hell together. I mean, we have a shared experience. But, you know, we’re on different paths.”

Harry also described how he felt sorry for William and his dad Prince Charles, who he described as being ‘trapped’ within the system of the monarchy. He noted that Charles has stopped returning his calls when he left the UK.

Both Harry and Meghan also alleged that an unnamed member of the family had raised “concerns and conversations” about how dark their son Archie’s skin might be before he was born.

Meghan told Oprah: “In those months when I was pregnant, we had in tandem the conversations of him not being given security or a title, and also concerns about how dark his skin might be when he’s born.” Neither of the couples identified the person who made the comments, but Harry added: “That conversation, I am never going to share. At the time it was awkward, I was a bit shocked.”

Harry criticised his relatives for failing to speak out in support of Meghan following the racism he said she faced in the media. He said: “No-one from my family ever said anything over those three years. That hurts.”

#National Security: We Would Hit Harder on Criminals – PMB

#National Security: We Would Hit Harder on Criminals - PMB