#National Security: We Would Hit Harder on Criminals – PMB 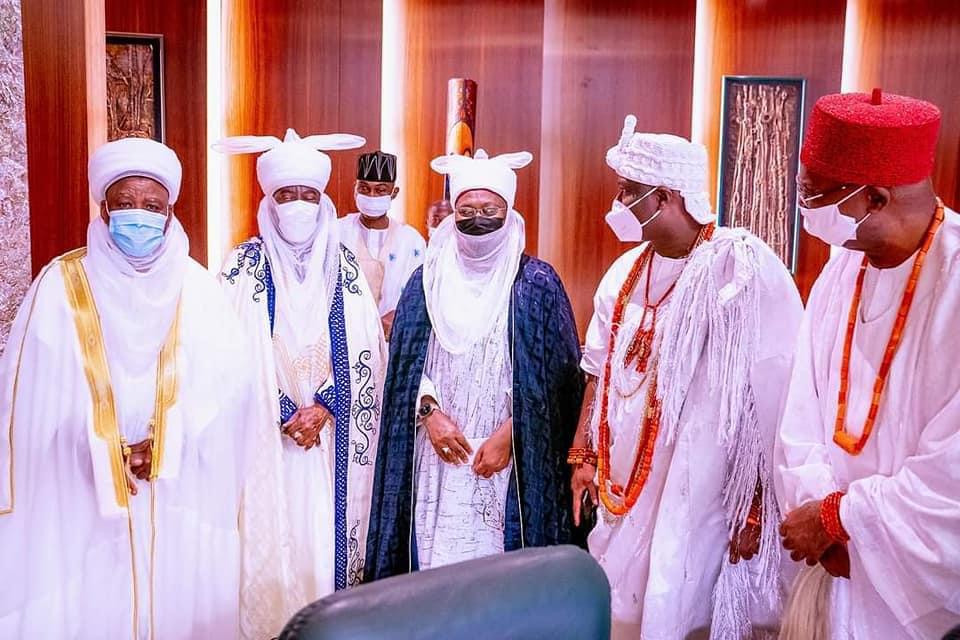 WE ARE GOING TO BE HARDER ON CRIMINALS, PRESIDENT BUHARI TELLS TRADITIONAL RULERS

President Muhammadu Buhari Thursday in Abuja emphasized that security chiefs have received marching orders to go harder on criminals, including to shoot anyone found illegally with AK-47.

The President spoke at a meeting with the National Council of Traditional Rulers of Nigeria at the State House, co-chaired by the Sultan of Sokoto, Alhaji Muhammad Sa’ad Abubakar III and the Ooni of Ife, Oba Adeyeye Enitan Ogunwusi. 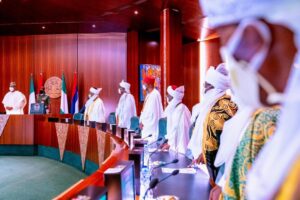 The President, who apprised the meeting with efforts by the government to improve the security situation in the country, said his administration has recorded appreciable successes in the North-east and South-South parts of the country.

‘‘But what surprises is what is happening now in the North West where the same people, with the same culture are killing each other, taking their livestock and burning properties. 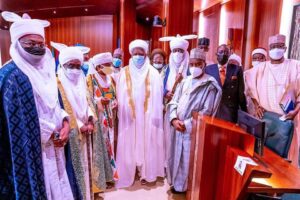 ‘‘As a result of that, we had a four-hour meeting of the National Security Council attended by the Ministers of Internal Affairs, Defence, Foreign Affairs, Service Chiefs, Chief of Defence Staff, the Inspector-General of Police and others and we gave clear instructions.

‘‘One thing that got to the press which I read myself was that anyone with an AK-47 will be shot.

‘‘This is because AK-47 is supposed to be registered and it is only given to security officials.

‘‘We closed the borders for some years but the intelligence report I’m getting on a daily basis is that those who are conducting the abductions, the killings and so on are still not short of arms and ammunition,’’ he said.

The President expressed dismay on the attacks on police stations and killings of security personnel by criminals, warning that no investor will invest in a country that is unsafe.

President Buhari also stressed the need for traditional rulers to use their roles and positions as bridge builders in each of their communities to complement government efforts at ensuring peace and security.

He appealed to the traditional leaders to deploy their reach and influence in the best interest of assisting the Government to root out those whose sole objective remains to cause trouble and destruction of livelihoods and families across the nation.

The President, who listened to various interventions from representatives of the traditional rulers from each of the six- geo-political zones in the country, pledged that his administration would continue to support and work collaboratively with them to ensure peace and stability.

Restating his marching orders to the newly appointed Service Chiefs to bring the security situation under control, the President noted that closer control can only be achieved with the cooperation and collaboration of traditional rulers and authorities, who occupy a critical role in our society.

‘‘By your role and positions with history dating back hundred years, the people trust you implicitly and in return you provide them with comfort and guidance in accordance with our cultural heritage and traditions.

‘‘You are the bridge builders in each of your communities. No one is better placed with your strength of moral authority to ensure that people who visit your communities for either business, leisure or any honest and credible reason are protected and made to feel at home,’’ he said.

In separate remarks, the royal fathers stressed the need for the traditional institution to be assigned definite roles, particularly on peace and security, within the ambit of the Constitution as well as regular engagement with the National Assembly on multiple fronts.