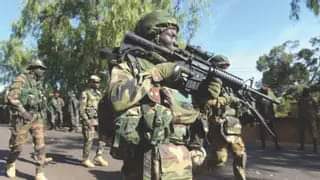 President Muhammadu Buhari has ordered the deployment of 6000 troops to Zamfara State.

Governor Bello Muhammad Matawalle made the announcement in a broadcast on Tuesday evening.

He said he undertook a four day working visit to Abuja to brief President Muhammadu Buhari and other critical stakeholders on security situation of the state.

“In the fall out my discussion with President Muhammadu Buhari and the security higher commands in Abuja, it was resolved that 6000 additional troops will be deployed to the state to complement the effort of other security forces in tackling the security challenges in the state”

“The troops will soon arrive the state for their operations and we are grateful to the federal government. As you may recall Mr President has ordered the security operatives to shoot dead any found illegally bearing rifle.

“The president has agreed to a timeframe within which the recalcitrant bandits should surrender their weapons and key in to our peace initiative. As you are aware, the peace deal initiated by my administration has recorded success including the disarmament, securing the release of hundreds of kidnapped persons, reopening of markets and the resumption of other economic activities across the state.

“Even though, we are enjoying relative peace as result of this dialogue and reconciliation programme, some armed bandits refused to key in to this programme and they sustain their attacks on our communities. The government has equally observed that there is sabotage by some unscrupulous elements within and outside the state.

“The state government has decided to take the following measures with immediate effect: traditional rulers and local council administrators should remain in their domains to monitor the movement or influx of suspicious characters.

“Conveyance of more than two persons on a motorbike is hereby banned with immediate effect, no movement of motorcycles in groups in all the nooks and crannies of the state and security operatives are directed to apprehend the violators of this order,” Matawalle said.

Governor Matawalle further reaffirmed ban on the activities of Yan Sakai (vigilantes) in the state, adding that whoever is found with gun would be dealt with. Daily Trust Newspaper reporting for;