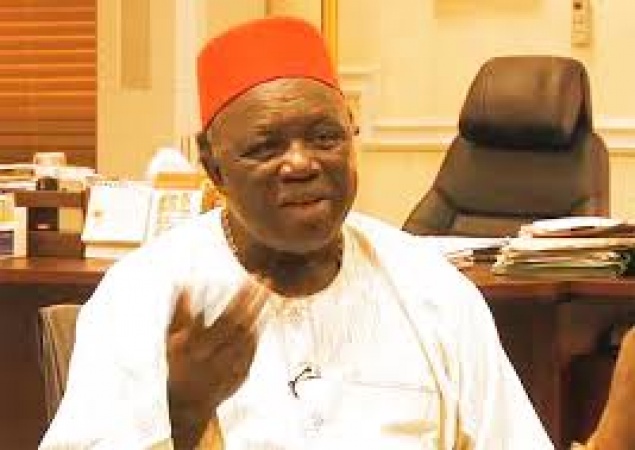 The President General of the apex Igbo socio-cultural organisation, Ohanaeze Ndigbo, Professor George Obiozor, yesterday, reiterated that Ndigbo are not at war with Nigeria, stressing that Ndigbo would continue their efforts to seek justice, peace and fairness in all their dealings with everybody in Nigeria.

Obiozor who spoke at a grand reception in his honour by Ndigbo Lagos, at the Civic Center, Victoria Island, cautioned those making utterances that have tendencies to put Ndigbo in danger to refrain from it.

He said: “Everybody should stop utterances or actions that will or have the tendencies to put Ndigbo in present and immediate danger or on harm’s way. That is what my message is in this matter. “Igbo are not at war with Nigeria. I want it to be noted very clearly. And we are not planning to have a separate existence from Nigeria. People should make no mistake about it.

“On the issue of Biafra, it is well beyond the capacity of young men to resolve. Biafra is a collective dilemma of Ndigbo and it is not a child’s play.

“Biafra is not a child’s play. It requires mature and experienced handling. Children should stop playing with fire and children shouldn’t play with fire. Nnamdi Kanu is one of us. He is our son and he must listen to some of us because he’s one of us.”

The former Ambassador of Nigeria to the United States of America described the security situation in Igboland as a matter of concern and national emergency.

“The greatest affliction of man is insecurity. With insecurity, nothing happens. It is the greatest challenge facing Ndigbo in particular and Nigeria at large. However, we thank God that the South East governors themselves shared this feeling and have started taking steps particularly, about anti-open grazing ban; a great step which we believe is the right step to take towards handling security challenges in Igbo land.”

On restructuring, Obiozor charged the Igbo to pursue it with pride and dignity, saying that Nigeria must be restructured in order to reduce hostile tension among ethnic nationalities and move the country forward.

According to him, restructuring would address the issue of hostile contacts among Nigerians and reduce tensions.

On his part, Ndigbo Lagos President, Major General Obi Umahi, rtd, described the event as home coming for Ambassador Obiozor. He however, urged him to collaborate with south eastern governors to give considerations and attention to three key areas which are: “security of Alaigbo, requiring an urgent need for state police, restructuring of the country and president of Igbo extraction come 2023.

“Ndigbo are not asking for too much. They are only asking for equity and fairness in a country they have contributed so much to its development,” he stated.