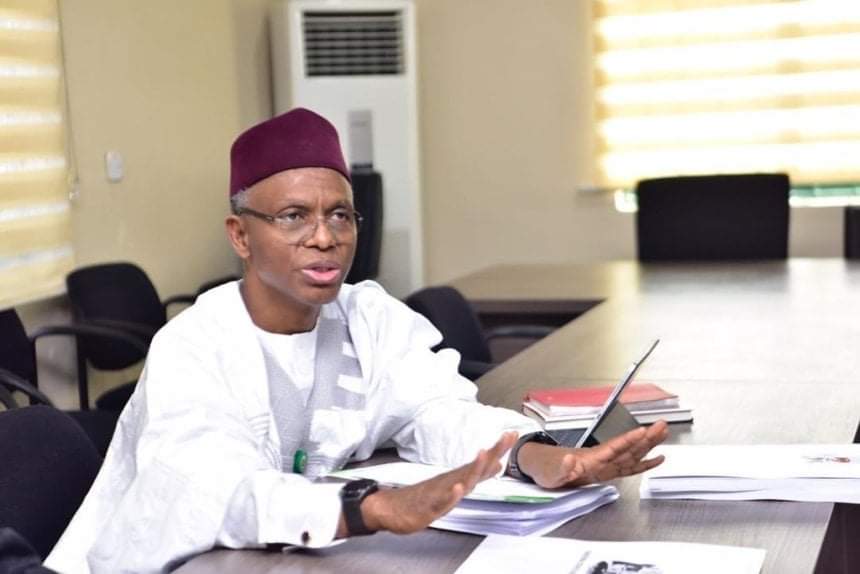 Nasir el-Rufai, governor of Kaduna, says Nigeria’s security agencies need superior weapons to fight insecurity and not prayers.
El-Rufai spoke on Monday during the town hall organised by the national security adviser — the meeting had in attendance governors from the north-west region and traditional rulers.
While announcing the rescheduling of the meeting, el-Rufai appreciated the service chiefs for their commitment to ending insecurity, and expressed the hope that the meeting will come up with a roadmap to end the security challenges in the country.
He noted that security should be the number one priority of the government and collective responsibility of all citizens.
“This town hall meeting is not complete without other stakeholders because of the short notice. So, we agreed that this north-west be reconvened in the next two weeks. The date will be announced by the NSA and COAS,” he said.
“Bandits now have the audacity to attack the military men. Bandits have become vulgar. Those who are not informed believe nothing is being done to deal with them.
“We need to support our security agencies not with prayers, but with superior weapons. Security is a collective responsibility.
“All of us, the governors, are going round, talking with stakeholders to calm people down.”
Simon Lalong, chairman of the Northern Governors Forum (NGF), urged Nigerians to learn to live in peace, irrespective of religious and ethnic differences.
“I came to add my voice on behalf of the entire northern governors. When looking for peace, we have no religion other than peace. We are determined to work for peace in the north and the entire country,” Lalong said.
On his part, Aminu Masari, governor of Katsina state, said government will keep working until everyone is secured.
“Security is community-based. All of us must go back to our community to ensure the security of the areas,” he said.
“It is our responsibility to provide security. We take responsibility to protect the people, irrespective of tribe, religion and where they come from.”
In his remarks, Babagana Monguno, national security adviser, said some Nigerians believe that the country has come to a dead end, owing to the rising insecurity in the nation.
Monguno noted that though security is the responsibility of the government, tackling insecurity requires a multifaceted approach.
He added that President Muhammadu Buhari is deeply worried about the issue and determined to end the menace.
“Buhari is worried and deeply concerned over wanton killings, not only in the north-west but in the whole country,” Monguno said.
“We have a lot of suspicious people undermining government efforts. Some of us are spiritual in our thinking. Some believe that we have come to a dead end.
“This is not the end of time as predicted in the Bible. It is in the book of Matthew that when you see brothers killing brothers, son killing father, nations fighting nations, the end of time has come. But this is not the issue with our country.
“It is true that security is the fundamental responsibility of government. Insecurity requires a multifaceted approach to overcome it.
With the new service chiefs, there is a new dimension to ending insecurity
“President Buhari is determined to end insecurity in the country. All the tiers of government must cooperate on security. “It is possible that other people outside the government are sabotaging government’s efforts, but the government will not give up.”