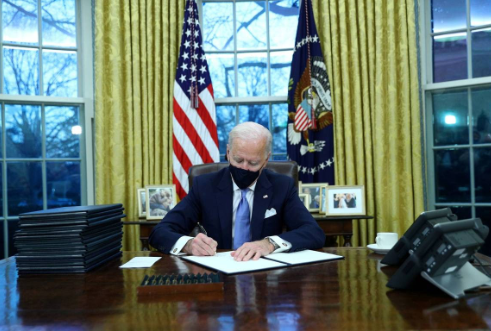 Bishop Emma Isong has urged US President, Joe Biden to take a Nigerian man as his second wife.

Bishop Emma Isong is the Presiding Bishop and General Overseer of the Christian Central Chapel International in Calabar.

The cleric stated this while reacting to news of the impending sanction of Nigeria and other countries who present an anti-gay stance. Indeed, Joe Biden had recently signed a memo to advance the cause of LGBT+ rights around the world; threatening financial sanctions on regimes deemed to have infringed on the human rights of lesbian, gay, bisexual, transgender, queer, and intersex people.

However, Bishop Isong stated that if Joe Biden wants Nigeria to legalize  gay; he should leave by example to take a Nigerian man as his second wife.

“I personally take it as a rumour that America wants to sanction governments that are anti-gay. The US has not communicated officially with the government of Nigeria,’’ Bishop Isong stated.

“Let there be an official gazetted letter signed by the Secretary of State of the United States telling us to become gay. Then we invite the president of the US to come and marry a man in Nigeria as his second wife.

“He must practise what he’s preaching. If the president of America wants Nigeria to practise gay; he should come and marry a man from here so we will know he means business.”

READ ALSO:  #Grassroot Developments: Where Did This Zulum Emerge From? Adesina

“Every nation is equal in the comity of nations. America is a country that believes in the tenets of democracy which is freedom of speech… I believe that Nigeria is an independent nation. We are not a nation under America.

“We are not among the states under American nation. Also, we have the right to be anti-gay. I believe no one can sanction us for that.

“If they sanction us for being against gays, we can sanction them for believing in it… The worst thing they can do is raise their visa fees and we raise ours too and they reduce it and apologise and we also reduce ours and apologise”

#Ahead Osun22: Omisore Defects to APC

#Ahead Osun22: Omisore Defects to APC