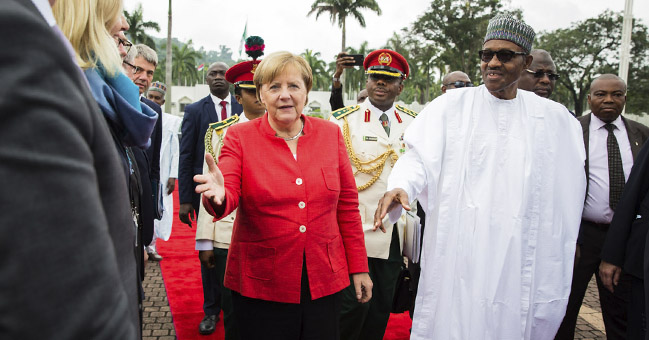 #Qualitative Leadership: European Story.
Germany Bid Farewell to Merkel with Six (6) Minutes of Warm Applause.
The Germans elected her to lead them, and she led 80 million Germans for 18 years with competence, skill, dedication and sincerity. 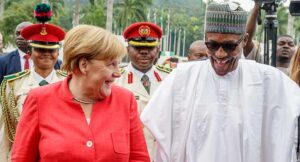 c
During these eighteen years of her leadership of the authority in her country, no transgressions were recorded against her. She did not assign any of her relatives a secretary .. She did not claim that she was the maker of glories. She did not  get millions out of her, nor did anyone cheer her life, she did not receive charters and pledges, she did not fight those who preceded her and did not dissolve her.  The blood of her fellow countrymen. She did not utter nonsense. She did not appear in the alleys of Berlin to be photographed.
It is (Angelica Merkel) the woman who was dubbed “The Lady of the World” and was described as the equivalent of six million men.
Yesterday, Merkel left the party leadership position and handed it over to those after her, and Germany and its German people are in the best condition.
The reaction of the Germans was unprecedented in the history of the Germans .. The whole people went out to the balconies of the houses and clapped for her spontaneously for 6 continuous minutes of warm applause, without popular poets, scum, scum, impudence, colorists  and climbers ..
Contrary to our Arab reality, there was no praise, hypocrisy, representation and drumming … and no one shouted (Merkel and Bass) or (Merkel a red line) ..
Germany stood as one body bidding farewell to the leader of Germany, a chemical physicist who was not tempted by the fashion or the lights and did not buy real estate, cars, yachts and private planes, knowing that she is from former East Germany.
She left her post after leaving Germany at the top. She left and her relatives did not repeat (We are the elders of the country). Eighteen years and did not change her old clothes.
God be upon this silent leader.
God be upon the greatness of Germany .. 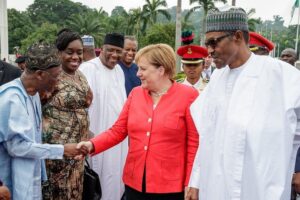 At a press conference, a female journalist asked Merkel: We notice that your suit is repeated, don’t you have another?
She replied: I am a government employee and not a model.
At another press conference, they asked her: Do you have housemaids who clean the house, prepare meals and so on?
Her answer was: No, I do not have female workers and I do not need them.  My husband and I do this work at home every day.
Then another journalist asked: Who is washing the clothes, you or your husband?
Their answer: I arrange the clothes, and my husband is the one who operates the washing machine, and it is usually at night, because electricity is available and there is no pressure on it, and the most important thing is to take into the account the  neighbors from the inconvenience, and the wall separating our apartment from the neighbors is thick.
She said: To them, I expected you to ask me about the successes and failures in our work in the government.
Mrs.  Merkel lives in a normal apartment like any other citizen .. This apartment she lives in before being elected Prime Minister of Germany and she did not leave it and does not own a villa, servants, swimming pools and gardens.
This is Merkel, the Prime Minister of Germany, the largest economy in Europe!!
Brooom Nigeria
broomhome.com.ng
08068505032 whatsapp
09054006557 Text/Call broomforeveryhome@gmail.com
Facebook.com/broom.home.1
Twitter@broomhome
Instagram@broomhome
READ ALSO:  These delicious Balinese street foods you need to try right now
Previous Post

We Would Register Nigerian’s Freely in a Fair Manner. No Cheat! No Neglect!! – Lagos APC

We Would Register Nigerian's Freely in a Fair Manner. No Cheat! No Neglect!! - Lagos APC