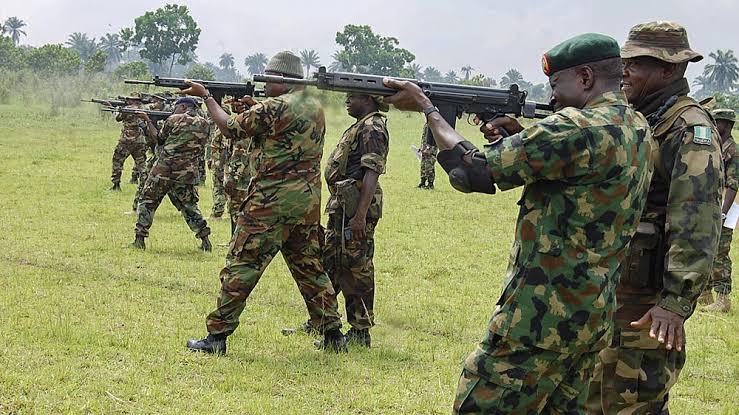 Recruitment into the Nigerian Army has assumed a new dimension with a record massive enlistment rate in the past few years.

In a bid to understand the rush for enlistment, this medium undertook an analysis of some of the factors responsible for the surge in interest for enrolment into the Nigerian Army.

In a series of interviews conducted, it was observed that part of the reason for the surge in the interest in the Nigerian Army is the reintroduction of professionalism and improved welfare packages for officers and soldiers.

The recently conducted enlistment for recruits into the Nigerian Army buttresses this point. The number of candidates that turned up for screening was massive so much that quite a substantial number was turned back for failing to meet the criteria that by all indication was stringent.

According to some of the interviewed recruits, they stated that enlisting into the Nigerian Army is a thing of pride and a medium to contribute their quota to preserving the country’s territorial integrity.

Adamu Salisu, an indigene of Kebbi State who was amongst those whose application was rejected, stated that he was disqualified because he didn’t have the required educational qualification.

“ I have only two credits in my senior school certificate examinations; the minimum qualification is five credits. I decided to try my luck because I am passionate about Nigeria. I like the way soldiers are fighting the Boko Haram insurgents. My uncle, who is a sergeant in the Nigerian Army encouraged me to apply because he wants me to benefit and contribute to Nigeria.” he said.

He further added that he would ensure that he serves Nigeria with all of his strength if given the opportunity.

“I love Nigeria, and I believe that I have what it takes to be a soldier. The Nigerian Army is the pride of the nation, and I have decided to go back to school and ensure that I get the required number of credits to be eligible to apply next year.”

In the testimony of another candidate, who pleaded anonymity because his family members are not aware of his application into the Nigerian Army stated that the Chief of Army Staff is his mentor with the achievements in office.

“ I have friends in the Army and from what they have been saying is that every soldier adores the Chief of Army Staff because he is the best commander in the history of the Nigerian Army. They have always told me that their welfare has improved since he became Chief of Army Staff. There is also local, and foreign training for soldiers and officers and merit is always rewarded so long you are dedicated and committed to your work.”

According to credible sources, candidates must possess at least a first degree with not less than Second Class Lower Division or HND of not less than Lower Credit in the arts, sciences or humanities from an accredited institution of learning. Courses of study must also be accredited at the time of the study. However, it was gathered that in 2020 recruitment, over 80% of those that applied had a master degree and 5% with PhDs.

This medium was able to interview some of the candidates that applied. It was gathered that the rush for enlistment into the Nigerian Army is a function of professionalism in the Nigerian Army. They were unanimous in stating that the Nigerian Army presents them the avenue to actualize their dreams of contributing to national development.

According to Chinedu Okafor, a graduate of psychology from Imo State University, he stated that it is a dream comes true for him enlisting into the Nigerian Army.

“The interview process was rigorous as we were subjected to a series of examinations. From the onset, I recall that those of us who enlisted for the Direct Short Service was about 15,000 for a 1500 opening. You can be assured that the process was very rigorous, and I thank God that I was able to scale through.”

“We all know that the country is faced with some security challenges, and the efforts of the Nigerian Army have been very pronounced. The Nigerian Army is the face of the war against insurgency and other acts of criminalities in the country. I don’t know of other services, but I tell you that anyone that adorn the Nigerian Army uniform is indeed passionate about the wellbeing of the country and this is the place to be.”

“I tell you that in the past four years, we have been under tremendous pressure dealing with the number of applications into the Nigerian Army. It is always a tasking period for us because of the numbers of applicants that yearly submit their applications in their thousands.”

When asked to comment on the rumours making the rounds of soldiers and officers disengaging from the Nigerian Army, he stated that it remains a figment of the imagination.

“We must give credit to the Chief of Army Staff because his leadership style has made the Nigerian Army the preferred destination for young and energetic Nigerians. All of these were made possible because of the level of professionalism that has been put in place in recent times.”

“Yes, you might find one or two applying for disengagement from service, but I can tell you that they constitute those who joined the Nigeria Army with a misplaced motive and priority. If you cannot give 100%, there is no way you can enjoy your stay in the Nigerian Army, and I believe this number is immaterial.”

He further advised Nigerians that are desirous of enlisting into the Nigerian Army to ensure that they are ready to give in their best as there is no room for mediocrity in the present-day Nigerian Army.”

“Those that want to enlist into the Nigerian Army without passion for what the Nigerian Army entails should do well to look elsewhere. The Nigerian Army is an institution with strong values meant for only those with the bigger picture in mind. This is what has changed since Lt. Gen. Tukur Buratai assumed leadership. Nigerian News reporting;