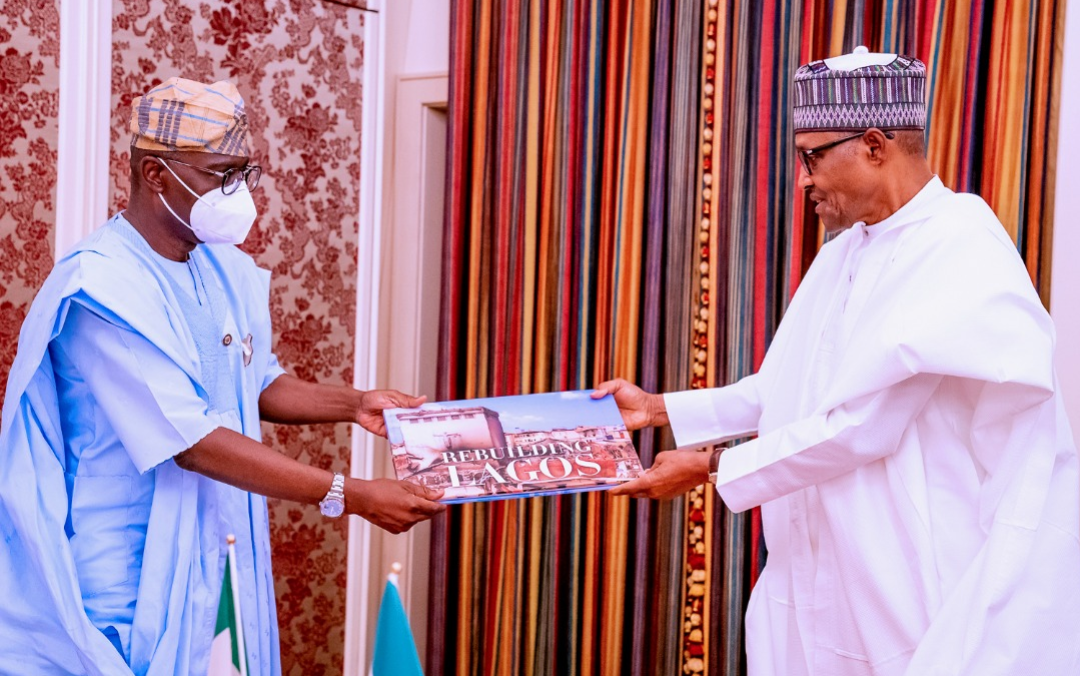 Lagos State Governor, Mr. Babajide Sanwo-Olu on Thursday sought collaboration from the Federal Government in rebuilding Lagos State following the aftermath of last year’s #EndSARS protests, hijacked by hoodlums, which led to the destruction of public and private properties and businesses in the state.

Governor Sanwo-Olu said the goal of ensuring Lagos State becomes Nigeria’s investment hub can only be achieved through economic collaboration between the State and the Federal Government.

Speaking to journalists after meeting with President Muhammadu Buhari at the Presidential Villa in Abuja on Thursday, Governor Sanwo-Olu said Lagos State Government has started working on how it will make available all that is required by the Lagos State Police Command for the law enforcement agency to be more alive to their responsibilities.

Governor Sanwo-Olu, who submitted to President Buhari, the proposals for re-building Lagos State and identified economic opportunities for rebuilding the State during the visit, also explained the plans of the state to tackle the second wave of COVID-19.

He said: “We believe we can further collaborate with the Federal Government, National Centre for Disease Control (NCDC), on all the great work we all are doing. I think as a Commander-in-Chief, it is important for me to give him a head start.

“Lagos is the commercial nerve center of the country and so we need to start up on economic programmes and activities that can improve not only our foreign direct investments but also make Lagos an investor destination in the country.

“I also briefed the president about security situation in Lagos and how we can further enhance and make the place a lot more business friendly. All the support we are currently receiving and how we can tweak and improve on all of the support especially with some Federal Government agencies.”

Speaking on his administration’s commitment to addressing the second wave of COVID-19 and increase in number of cases of coronavirus infection in Lagos State, Governor Sanwo-Olu said the State Government has built about 10 oxygen plants and commissioned about four and provided other facilities in public building to meet the respiratory requirements.

He said the second wave seems to be a bit more infectious than the first one, considering the number of people who have tested positive to COVID-19 and the fatality rate around the country, especially in Lagos.

The Governor therefore urged the citizens to take responsibility and to know and appreciate that COVID-19 is real, therefore they need to obey all the protocols that have been set out for them to obey.

He said: “We have seen, unfortunately, the fatality rate around the country, even in Lagos. One of the things we have realised is that a lot more people require oxygen attention, they need additional breathing aid. So we have started building what we call oxygen tent, oxygen facilities; we are building about 10 of such facilities.

“We have commissioned about four of them and we are also building additional two oxygen plants in the state so that we can meet the respiratory requirements. We understand the virus more than how we did eight to 10 months ago, so we know what treatment should be. We are better positioned for that.

“We are also doing a lot more testing in Lagos than we were doing five to six months ago: we are doing almost 2,500 to 3,000 tests every day, so we are watching the rate of positivity that we have, which is also high. It has moved from the usual 10 to 12 per cent and we are now seeing positivity rate of about 25 and sometimes 30 per cent. That is actually very disturbing.”

Governor Sanwo-Olu also disclosed to the journalists that Lagos State government has supported some of those affected by the #EndSARS protests.

“We are carefully taking a proper study to know what we need to do, taking our time to get it right but we have started something. Businesses that were affected, somebody having a shop looted or burnt or something. We have been able to directly support such businesses, especially on a micro, small level using the Lagos State Employment Trust Fund.

“They have started intervening and supporting some of these small businesses, giving them grants, giving them soft loans and making sure that they can come back together very quickly,” the governor said.