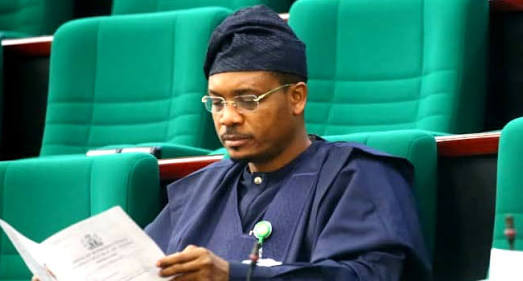 The representative of Iseyin, Itesiwaju, Kajola and Iwajowa Federal Constituency, Hon. Shina Peller, has described the decision to invite President Muhammadu Buhari by some legislators over the spate of insecurity in northern Nigeria as unnecessary.

The House of Representatives member disclosed this at a lecture and symposium organised on Saturday at the main hall of Iseyin District Grammar School by The Chronicler Newspaper, a community tabloid at Iseyin, Iseyin Local Government Area of Oyo State.

The gathering of stakeholders in the town was targeted at addressing the effects of the destruction suffered by the community after hoodlums attacked the community police station and other public and private facilities in the town during the #EndSARS protest.

The legislator said the level of insecurity in the nation, particularly in the North West, called for united front and consensus resolutions to foster lasting peace and not what he called a resort to power play between the legislative and executive arms of government.

Peller opined that instead of arguing over the need for the President to appear in person to address a joint sitting of the Senate and the House of Representative members, efforts should have been concentrated on legislative procedure to effect possible changes in the prosecution of the war against terror.

He said: “Instead of resorting to distraction on arguing over why the President should come or not come, why did we not concentrate on the possible legislative solutions on making effective changes in the procedure of prosecuting the war against Boko Haram?

“The popular demands range from the call for the change of the Service Chiefs to deployment of mercenary fighters to prosecute the war.

“I believe the legislature still has the power to pick on the best alternatives as the representatives of the people.

“Rigmarolling on whether the President should appear before the joint session was a distraction from the reality on ground.”

In his advice to the elders and youths of Iseyin community, Peller said the time has come for the people to realise that public facilities were meant to be protected and maintained by the people, adding that burning the police station to spite the police was an indirect attack on facilities owned by the community.

On the outcome of the #EndSARS protest, Peller hinted that demand for police reform could not have been achieved immediately as insisted upon by the protesters.

He said it would involve a lot of processes that contained budgeting and appropriation.

The representative of Iseyin and Itesiwaju State Constituency, Hon. Dele Adeola, said the solution to youths’ restlessness and criminality was hinged on quality education and skill acquisition at the rural communities.

The member of the Oyo State House of Assembly maintained that the establishment of a Faculty of the Ladoke Akintola University of Technology would go a long way to change the orientation of many youths that believed in surviving through commercial motorcycle riding or young ladies going to Lagos to do menial jobs.

READ ALSO:  National Security & Baga Shootings: As Zulum, What Would You Do? - Isa Gusau

Adeola said: “It is necessary to state here that our youths need skill acquisition and quality education now more than ever.

“We have to open up skill centers that will suck in the large number of unemployed youths in our community and they will through this serve themselves and the society positively.

“On the higher institution of learning, it is still my belief that the present administration under Governor Seyi Makinde will give Iseyin a Faculty of the Ladoke Akintola University of Technology.

“With this in place, our youths will not only acquire education that will sustain them, but that which will change their orientation about life and societal development.”

The National President, Iseyin Development Union, Alhaji Bayo Raji, said efforts were in top gear to get the police authority to return to their post in the community.

Raji said most of the facilities of the security agencies in the community that were destroyed by hoodlums have been restored, while a section of the burnt police station has been rebuilt.

The Guest Lecturer of the day, Prof. Ayobami Ojebode of the Communication and Language Department, University of Ibadan, said in his lecture, titled: “Aftermath of Vandalisation: Language As A Weapon of Peace and Restoration,” that every society in the world that could be said to be peaceful and economically developed would take the language of peace as sacrosanct.

Ojebode added that linguistic violence preceded physical violence in any warring society and urged Nigerians, especially the people of Iseyin, that with the current situation in the country, every gathering of people should take the discussion of peace as important.

He said: “We should start harping on peace in our religious sermons.

“Every gathering of people, either as a society or interest group, should be discussing the topic of peace now.

“It is the only way to survive the present dangerous trend in the globe.

“It is not just in Nigeria that there is apprehension.

“COVID-19 has dealt a big blow on the world economy, but even before then Nigeria has always been bedeviled by sectarian crisis.

“Boko Haram killings, bandits killing, kidnapping, armed robbery and the rest of the vices have been in existence before the pandemic, but the effect of the disease on the economy has heightened criminal activities, but the only solution now is to be talking peace.”

The event was attended by various stakeholders as represented by the members of the traditional council, security agencies, market women, religious bodies, artisan groups and students’ representatives.