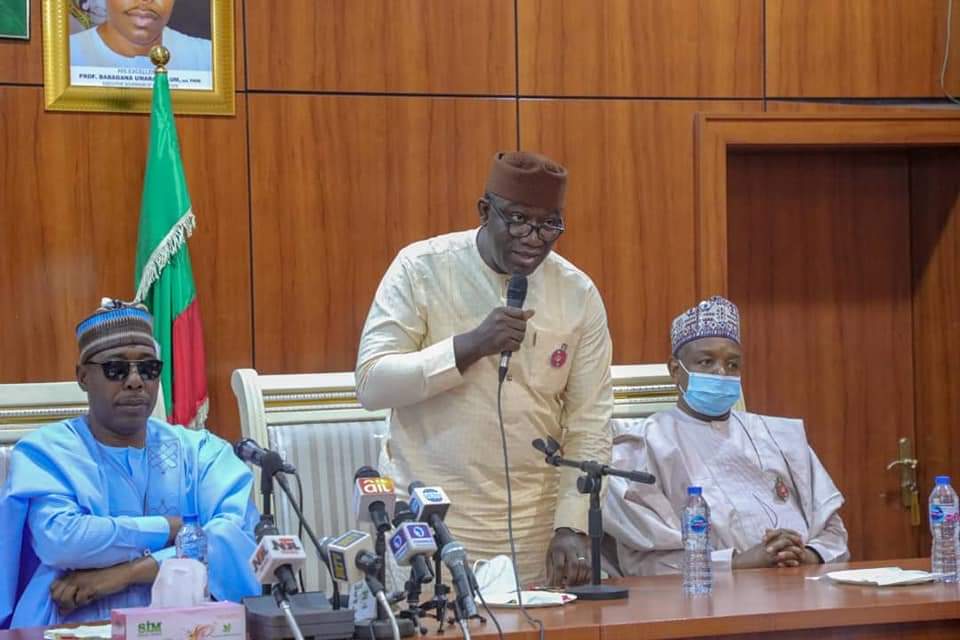 We are all frustrated, Fayemi declears

The Nigerian Governor’s Forum Chairman and Governor of Ekiti State, Kayode Fayemi disclosed that the security challenges are beyond the Nigerian military, He said, they are overwhelmed and cannot tackle the security situation affecting many parts of the country, that includes, Insurgency, banditry, kidnapping and armed robbery.

“We are here your Excellency, first to express our condolences to the families and loved ones of our lost citizens, and also to the good people of Borno State, and yourself as the leader of our people here.”

“But what happened in the last three days is by far beyond any imagination, it was a masacar and it was one that none of us could come to terms easily.”

“I know there is an element of fatigue that will crip into this, everytime this happens we never let you rest on your phones expressing sympathise, we come here as delegation, you speak to us about your genuine believe on what could help us tackle this challenge that is depleting our country and we pledge to take steps to engage the leadership of our country. So there is very little we can say to you now that we haven’t said before as your brothers.”

“There is nothing new that you haven’t told us, that you haven’t told the delegation from Mr President yesterday. We have all heard directly from you, your 6 point agenda, we have read it and you have just expressed to us in our private conversation. All I can say to you sir, is that we fully and wholeheartedly endorsed every single point on that agenda.”

“The reality we can all say, i personally as security scholar, the reality i can see is that our military is overwhelmed. Our military is no longer in a position to single handedly tackle this menace effectively. It is not a criticism of our military, if one were to suggest a coalition beyond that will even include our neighbouring countries who are probably more experienced in fighting asymmetrical war. It will not be a lost of our pride as a country, if that were to happen and this certainly something that we as your colleagues and brothers will put before Mr President.” Governor Fayemi said.

Governor Fayemi made the statement in Maiduguri, when they paid a visit to Governor Babagana Umara Zulum to condole with government and people of Borno over an attack by the Boko Haram insurgents, where over 40 farmers were slaughtered.

He was accompanied by the Governor of Sokoto and the Vice Chairman of the Forum, Aminu Waziri Tambuwal, Governor of Kebbi State, Atiku Abubakar Bagudu and that of Niger State, Abubakar Sali Bello.

The Governor also stated that, their visit to Borno is an expression of their frustration for not been able to despite many attempts make any meaningful development in the security problems facing the country.

“This not a visit to gratify ourselves that we have come to you, no, it is expression of also our own frustration that we have not been able, because we have held series of meetings, you have been present at these meetings, some with Mr President, meetings with security chiefs, we have highlighted all the issues, you have spoken, frankly on all those occasions, but we are still where we are.”

“We can’t bring back the people we have lost in the last couple of days, but if we do not take the necessary steps the entire nation will be consumed by this insurgency.” Fayemi added.

He noted that, despite all the Nigerian Governor’s Forum will continue to support the government of Borno in engaging appropriate authorities to find solutions to the insecurity.

“We need to stand solidly with you, assist in whatever way you want us to, ensuring that our government takes the right position in order to tackle this problem. I want to assure that we shall not relent as your brothers in conveying this to the appropriate authorities.” Gov. Fayemi said.

The Governor of Borno State, Professor Babagana Umara Zulum who was adversely disturbed the recent gruesome attack on farmers have decried the continous attack on innocent people.

” We need to address the underlying causes of the insurgency, while appreciating the effort of the federal government in implementing some policies that are geared towards addressing poverty in the entire nation, Borno State deserve more.” 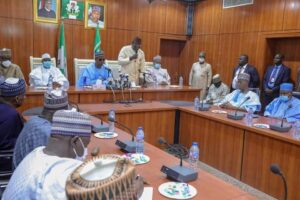 ” We have said all, there is nothing new that i can say. But when shall we end this insurgency, that’s something very important.” Zulum said.

Zulum also expressed appreciation for all the members of the Nigerian Governor’s Forum for their support to Borno in time of its needs. He also thanked them for the visit.