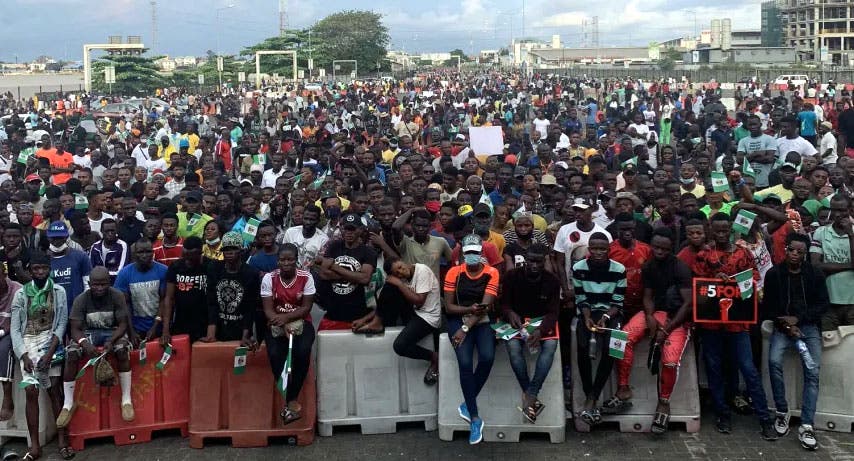 The Cable News Network (CNN) has backtracked from its earlier position that at least 38 persons were killed by the Nigerian military on Tuesday, October 20 during the EndSARS protests at Lekki Toll Gate, as many Nigerians have lambasted the news network for projecting misinformation and its inconsistent reportage on the EndSARs protests and alleged number of deaths at the Lekki Toll Gate.

It would be recalled that on October 23, the CNN Africa on its Twitter page stated categorically that, “At least 38 people were killed in Nigeria on Tuesday when the military opened fire on peaceful protesters. But the President failed to address the carnage during his speech on Thursday, drawing criticism from protesters who accuse him of failing to show empathy and unify the nation.”

The station had followed that with a broadcast that failed to substantiate its claims, as the report brought out only one person who alleged that his brother might have been killed at the Lekki Toll Gate. This was despite the fact that the CNN correspondent Nima Elbagir stated that the network spoke to hundreds of persons who were at the scene.

And, in an apparent volte-face, and to save face from the embarrassment of its flawed reportage, the CNN posted a tweet of what it called a ‘Clarification’ under the previous October 23 tweet. The Clarification stated that, “This tweet from October 23 did not attribute the death toll from protests in Nigeria to Amnesty International. The tweet also did not make it clear that the death toll was for protests across the country.”

A CNN website link posted with the Clarification tweet was a report on the protest titled, “Prison set on fire in Nigeria as protest death toll rises to at least 56.” According to the CNN report, “At least 56 people have died across Nigeria since the #EndSARS protests began on October 8, with 38 killed across the country on Tuesday alone, according to human rights group Amnesty International.”

The glaring inconsistencies in CNN reportage were not lost on Nigerians as many lambasted the News network for its ‘fake news’ on the death toll in Lekki Toll Gate.

It has since been established that there was no massacre as called by CNN and some other foreign and local news media.

Since the CNN backtracked with its tweet on Thursday, Nigerians have also lambasted the news network for its biased report that many said was not objective or balanced as professional ethics of journalism demanded.

“The Power of Misinformation! How to Fuel Conflict in Africa! @CNNAfrica original tweet which led to massive coverage on @cnni @CNN @cnnbrk @CNNnewsroom had 16.5K RT but CNN so-called “clarification” sneaked in as Nigerians slept has 629 RT. CNN can do better! Report FACTS ONLY!”

In the same vein, a Nigerian with the Twitter handle @ExcellentHeart said, “They (CNN) and their enablers like profit from chaos & sectarian violence like the type they fanned in Libya & Syria, but their plot failed in Nigeria. The circus of shame for these organisations is unparalleled. The whole world sees how discredited they are.”

Many Nigerians who also commented under the CNN clarification Twitter thread, wondered why a station with a global reputation for its credibility would publish and broadcast such reportage that fall below required professional journalism standards.

In his response, Tunji Insuranceman stated, “Nobody is above mistake; @CNN should simply own up on this and apologize for their misleading news that led to wanton destruction across Nigeria states especially Lagos. This is d most honourable thing to do in the circumstance rather than this “clarification.”

Also, Femi Benson described CNN reports on the alleged killings at Lekki Toll Gate as falsehood. “You’ve messed with the wrong country. Now retract the falsehood you peddled and apologize to Nigeria,” he wrote.

For Susan Henshaw, “When you do your job right, you don’t need to update the story 15 times with irrelevant details OR explain your tweets. Apologize for the fall out your reckless reporting has caused. Your subsequently doubling down repeatedly would require much more than an apology.”

Another Nigerian stated that, “Because they (CNN) lied. Lots of things happened that night in Lekki, but there was no massacre. If (the) army open(ed) fire on that crowd, more than one thousand will go down at once not to talk about injuries.”

“This is what happens when you get most of your information from “TikTok” videos. Now you are trying to swallow your words back after putting out false information. @camanpour @cnni All we are asking is thorough investigative journalism!! And put out the truth,” a Nigerian, Baba T.O. tweeted.

Olabode Owoeye urged CNN to, “Just admit and tender apologies to your audience and Nigerians for this unpardonable disinformation.”

In the same vein, Sir Udofia, replying to @CNNAfrica, wrote, “A global media I was looking up to for credible info has just gone to the dogs. CNN pride used of it satellite to capture @HQNigerianArmy opening fire at protesters, now admitting mistake about their erstwhile ‘thorough’ investigation. SMH. Don’t believe what you read or see.”

While Abu Mu’meen said, “The key portion of your original tweet are highlighted in this screen capture. You either apologies to Nigerians or take down the fraudulent, divisive and deceptive tweet. All these ṣàlàyé amounts to nothing. Nigerians are a lot smarter than you all,”

One Tony Montana also had choice words for CNN. He wrote, “You must think everyone is stupid. Your tweet said the deaths, all of them, occurred on Tuesday 20th October! Shame on @CNN @CNNAfrica.”

It would be recalled that on November 19, the Minister of Information and Culture, Alhaji Lai Mohammed, while addressing issues on the EndSARS Protest and its aftermath, called out CNN for its ‘jaundiced reporting’ on the alleged killings at Lekki Toll gate.

According to the Minister, the biased CNN report was “a poor piece of journalistic work by a reputable international news organization. CNN engaged in incredible sensationalism and did a great disservice to itself and to journalism. In the first instance, CNN, which touted its report as an exclusive investigative report, sadly relied on the same videos that have been circulating on social media, without verification.”

“If CNN had done its investigation properly, it would have known how fake news and disinformation were trending during the EndSARS crisis. The BBC even did a report on this, and we recommend that report to CNN.

Talking about the BBC, a reporter with the BBC’s Pidgin Service, Damilola Banjo, was at Lekki Toll Gate protest ground that night. She was quoted as saying soldiers were indeed at the Toll Gate but they shot ‘’sporadically into the air’’ and not at the protesters. CNN that was not at the scene reported otherwise.”

The Minister noted that the soldiers were briefed on the Rules of Engagement before deployment, which they adhered to all through. “Soldiers at Lekki Toll Gate fired blank ammunitions into the air. Blank ammunition cannot do any damage to the flesh, not to talk of killing anyone. Firing live ammunition into the crowd, as some have alleged, would have led to mass killing, which never happened,” he added. Vanguard Newspaper reporting for;