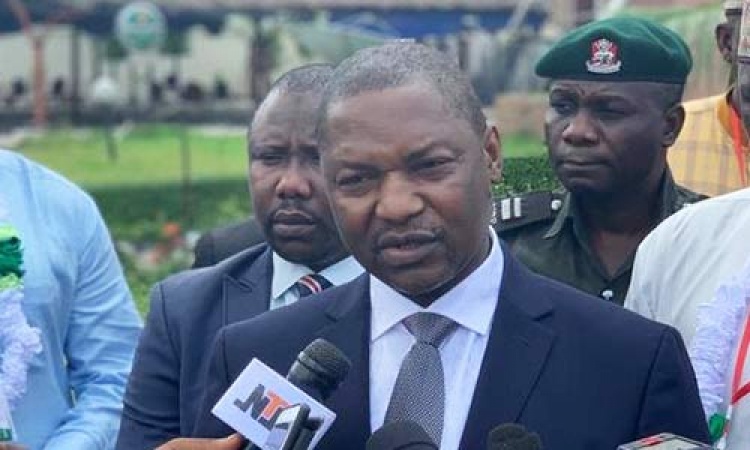 Minister for Justice and Attorney General of the Federation, Mr Abubakar Malami has been enjoined to tender an apology to Nigerians for lying over the involvement of soldiers in the shooting of protesters at Lekki tollgate in Lagos State.

A member of the House of Representatives, Hon. Tajudeen Yusuf (PDP: Kogi) said it was unfortunate that the chief law officer told a lie that hoodlums dressed in military fatigues were involved in the shooting incidence.

Yusuf in a statement advised the Federal Government to reverse its “missteps” of freezing bank accounts, as well as siezing of international passports of Nigerian youths considered to have actively taken part in the nationwide protest against policy brutality, otherwise known as “#EndSars Protest”.

Recall that the Central Bank of Nigeria had reportedly obtained a Court injunction enabling it to freeze accounts linked participants in the #EndSARS protests.

Yusuf also described as “condemnable” the circumstances surrounding the withdrawal of two youth members of the Lagos State Judicial Panel of Inquiry and their subsequent resumption of sitting during the weekend.

Rinu Oduala and Temitope Majekodunmi, the youth members of the Lagos State Judicial Panel of Inquiry resumed sitting on Saturday November 14, after boycotting the panel for more than a week in protest against the Central Bank of Nigeria’s freezing of their bank accounts and that of other #EndSARS promoters.

Yusuf said that while there are lessons to learn by both the protesters and the government, the Attorney-General of the Federation (AGF) and Minister of Justice, Abubakar Malami’s alleged statement that “hoodlum in military fatigues shot at protesters deserves to be followed with a national apology.”

According to him, “it is thoroughly confounding that in spite of the Federal Government promise to look into the demands of the protesters, government went to great lengths with actions and words that aroused real doubts over its sincerity.”

“While right thinking citizens feel concerned about the real possibilities of driving the democratic expression of dissenting opinions into the threatening catacombs of underground activities, the Federal Government must advice itself against further deliberate mis-steps.

“It is absolutely pathetic that a government that promised progressive ideals has consistently shown a tendency to find comfort in dictatorial fiat and jackboot oppression of its people,” he stated.

Lamenting further, the lawmaker said: “It is absolutely regrettable that the idealistic youthful protesters were being deliberately confronted with strong-arm tactics and disrespectfully lumped together by government in a manner suggestive of deliberate official mischief aimed towards obliterating their credibility.”

“Lawful protests are part of citizens’ inalienable democratic rights and the October protests by youth and activists laid out a five-point demand before the government calling for an end to police brutality across the country.

“They also asked for immediate release of arrested protesters, justice for all deceased victims of police brutality, appropriate compensations for their families, setting up of an independent body to oversee the investigation and prosecution of all reported police misconduct within a period of 10 days.

“Their demands for a psychological evaluation of disbanded Special Anti-Robbery operatives, increase in police salary and compensations all resonated with the Nigerian public”, he stated.

While noting that the Federal Government’s Presidential Panel on Police Reforms acceded to the five demands made by the protesters, Hon. Yusuf stressed the need for government to foster a sense of belonging and social justice rather than decisions that further portrays Nigeria in negative light internationally. Guardian reporting for;