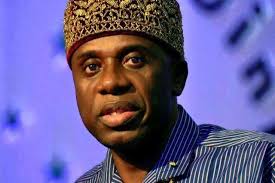 An indigenous firm, Insight Dynamic Resources Limited has dragged the minister of Transportation, Rotimi Amaechi before a Federal High Court, Abuja over the rail project.

This is even as the firm expressed displeasure over its failure to take part in the nation’s Rail Project which Export–Import Bank of the United States has indicated interest to fund via government to government arrangement.

In the suit with No: FHC/ABJ/CS/2020 filed, yesterday, by the counsel to the plaintiff, Babah Bagudu and Richard Ibeh, it said the firm and most other entities had engaged the ministry of Transport to participate in the Nigerian Rail Development Project through Railway Rehabilitation and actualization of the federal government 25 years Rail Policy as a prominent, reputable player and expert in the execution of the contract in view.

The suit held that the ministry of Transport indicated its interest in partnering with the firm which in turn engaged an American Global 500 Fortune Company Architecture, Engineering Construction, Operations and Management (AECOM) and leader in International Railway Construction as well as the United States of America Export-Import Bank (US EXIM).

In the suit, Bagudu said after the ministry of Transport had caused the plaintiff, Musa Kuchi who is the project development coordinator, Insight Dynamic Resources Limited, to change its position by engaging leading global partners and foreign financial institutions, he alleged that the transport minister, without regard to due process of law, rights and interests of the plaintiff and its global partners, equally in total disregard of extant procurement and infrastructure concession rules unilaterally singled out Messrs CCECC of China as a preferred tenderer and applied to the Bureau of Public Procurement for a Letter  of “No Objection”. which would allow and mislead the Federal Executive Council into awarding the Contract to Messrs CCECC of China.

In the suit, the 2nd Defendant, director general Bureau for Public Procurement was also alleged to disregarded extant procurement rules in proceeding to issue a letter of “No Objection to the Ministry of Transport to enable it forward same to the Federal Executive Councilfor approval.

Consequently, the firm prays the court for a ‘’declaration that the request by the minister of Transportation for a No Objection Certificate in respect of the Contract of the rehabilitation and reconstruction of Port Harcourt-Maiduguri, Eastern Narrow-Gauge Railway with New Branch Lines and transhipment facilities contravenes the provisions and intent of Sections 16 and 40 of the Public Procurement Act, 2007.

‘’A declaration that the No Objection Certificate issued by the director general of the Public Procurement Bureau in respect of the Contract of the rehabilitation and reconstruction of PortHarcourt-Maiduguri, Eastern Narrow-Gauge Railway with New Branch Lines and transhipment facilities contravenes the provisions and intent of Sections 16 and 40 of the Public Procurement Act, 2007 and is liable to be set aside.

‘’A declaration that the Federal Executive Council cannot rely on a due process certificate of No Objection issued in favour of CCECC Nigeria Limited which is flagrantly in contravention of the provisions of Sections 16 and 40 of the Public Procurement Act, 2007.’’

The case is yet to be assigned and date has not been fixed for hearing. Tunde Oguntola & Leadership Newspaper reporting for;

#EndSARS & Lekki Shooting: You Cant Rule out Hoodlums Setting in to Create a Scene – AGF