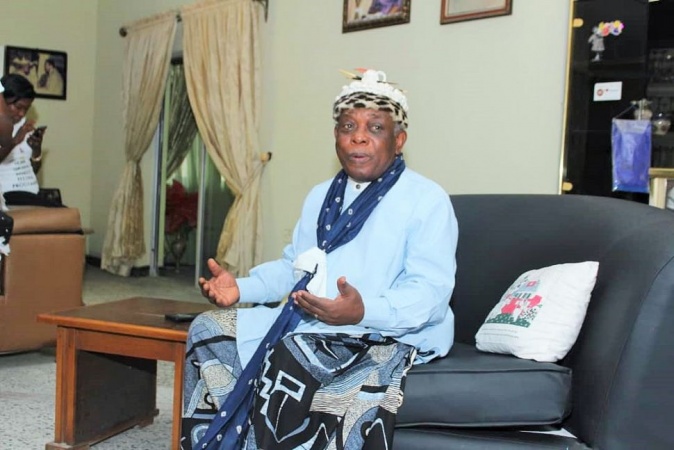 The Paramount Ruler of Calabar South Local government Area of Cross River State, HRM Prof. Itam Hogan, has asserted that the #EndSARS protest was just the key that opened the Pandora box that ended in violence.

The monarch who spoke during a courtesy visit by the former Governor of Cross River, Senator Liyel Imoke, National Assembly members and major political stakeholder in the state, said that Nigerian youths were hungry, angry and feel abandoned by the government.

Prof Hogan, who condemned the looting and wanton destruction in major parts of Calabar and other LGAs in the state said that the youths felt neglected by political leaders.

His words: “The #EndSARS protest was just a key that opened the Pandora box that culminated into violent crimes like arson, vandalism and so on. If we are not careful it would be more bloody as they will come after us and they will go from house to house next time. We will not be able to walk on the streets. When you drive your big Jeeps, many of our children feel bad and they hate you.

“They feel that way because they think you are using their money to buy the Jeeps and from what I gathered, many of them who caused the violence were people between 18 and 35 years of age.

“If our schools were also open, I don’t think that the huge number of people who were on our streets would have had the time to do so because they would be in school busy with work and other things. The ball is now in the court of you, the politicians, we are equally scared. “I want to further appeal that whenever you make promises, make sure they are fulfilled in a transparent manner and be truthful when you mention figures.

“There have been a lot of failed promises and this has angered the young people really deeply and many politicians forget they are from communities, our people are really hungry.”

On his part, Sen. Liyel Imoke appealed to the traditional institution and leaders to assist by engaging the youths as dialogue was the only platform that can drive a peaceful resolution and create an atmosphere for growth and development to thrive.

He said: “I know it is very challenging but it behoves on us to dialogue with the youths. The reaction in Cross River is a great concern for us, if we don’t dialogue we cannot move forward.

“Please, you have to kick start action towards peaceful resolution. As traditional leaders, you are the bridge builders. I also want to say that the population of youths we saw on the streets may not represent all our youths.

READ ALSO:  Olukayode Ariwoola was instructed to address the petition against the high court judge by CJN

“If you look at Calabar, the population might be about one million if about 5,000 youths came out to cause this kind of destruction it doesn’t represent the whole of them because there are over 200,000 of them who don’t support the devastation that happened.