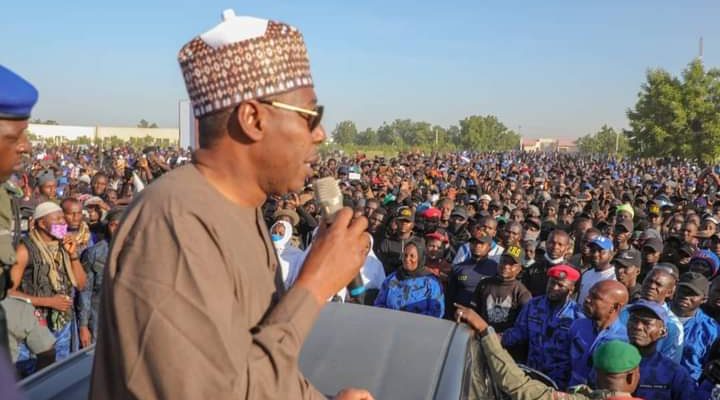 Borno State Governor, Babagana Umara Zulum has approved government scholarship for children, most of them orphans, whose fathers were volunteers amongst Civilian JTF, hunters and vigilantes killed at battle fronts while fighting boko haram in the last seven years.

Zulum also flagged off a welfare package of N50,000 each for widows of those killed volunteers and the distribution of N180m and 27,000 bags and cartons of food variety to 9,000 volunteers.
The Governor announced all the interventions made on Wednesday in Maiduguri, while addressing a gathering of about 9,000 volunteers who have been fighting alongside the Nigerian armed forces to resist Boko Haram insurgency in Borno.
The volunteers were gathered at the campus of Borno state University.
Each of the 9,000 volunteers is to receive 20,000 naira cash, a 50-kg bag of rice, a carton of spaghetti and a gallon of cooking oil, all of which were outside their regular monthly allowances.

This juicy gesture is coming from Borno State Governor, Mr Zulum as at the time there is hunger in the land that most Vulnerable Nigerians have retired to both public and private warehouses suspected to accommodate food stuff.

READ ALSO:  Beware of Bank Fraud When You Loose Your Phone or Alert Sim (video demonstration))