Jakande, Tinubu Others Honoured by School 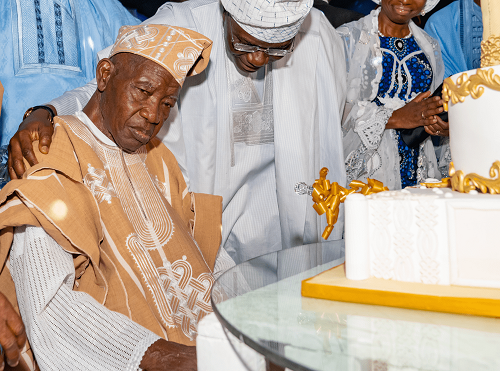 Alhaji Jakande was bestowed with a sterling leadership award for his vision in the formulation of policies that gave birth to the school.

Ex-Governor Tinubu got the same award for his government’s role in returning missionary schools to original owners.

Headteacher Tunde Oduwole got a meritorious gold service laurel in the category of current and former headteachers.

The late Revd. Adelakun Williamson Howells was given a post-humous sterling leadership award.

Highlights of the occasion include the planting of 40 trees by dignitaries, and donation of air-conditioners, public address system for the multi-purpose hall, steel doors, automatic project display screen, complete with a next-gen laptop for electronic projection and presentations in Mercy Demben Hall.

The ICT suite was upgraded by various sets of the school’s alumni.

In his address, Oduwole described 40 years as a significant figure indicating maturity, victory and success.

“Past governors of Lagos were awarded because it was during the administration of Jakande that the school was founded and under Tinubu that schools were returned to the missionaries, against all odds.

“The awards are just to salute the two of them and the governors in their successive generations. That is why we also gave an award to the Commissioner for Education, Mrs. Folashade Adefisayo, on behalf of the state government.

Secretary of HMGS ’95 set and chairman of the organising committee for the 40th Founders’ Day Sodiq Afinah said the set decided to give back to their alma mater.

The set’s governor, Adejoke Ajayi, lauded the school’s impact on pupils. The Nation reporting for;