1 Term for Olu: No Plans to Replace Abiru with Sanwo in 2023 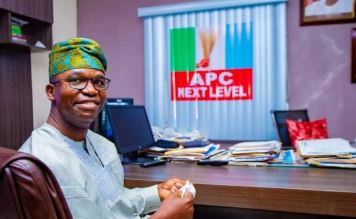 The Lagos state chapter of the All Progressives Congress (APC) on Sunday said reports that Tokunbo Abiru, the party’s candidate for Lagos East senatorial  district bye-election is scheming to replace Governor Babajide Sanwo-Olu in 2023 is the handiwork of  the opposition in the state.

Seye Oladejo, the party’s Publicity Secretary  who said the APC is focused on the bye election scheduled for October 31, added that the aim of Peoples Democratic Party (PDP) is to cause disaffection in the APC and distract Governor Sanwo-Olu from delivering the dividends of democracy to Lagosians who overwhelmingly for him in the 2019 general elections.

“The report that Abiru is being prepped to replace Governor Sanwo-Olu in 2023 came from the camp of opposition because we won’t have a governorship election until the next two and half years. So, our party and Abiru as a candidate is focusing on

“The opposition will want to throw a spanner on the wheel to cause disaffection in the ruling party, perhaps that’s why they remain as permanent opposition in Lagos State”.

“But nothing can be farther from the truth, Abiru is focusing on the ticket he got from APC and I enjoy some personal relationship with him and I can tell you that he is not even thinking beyond the present mandate he has.

But it will suit the propaganda of the PDP to say that somebody is being prepped up to take over from the governor and you can see that the governor didn’t even respond to that”.

Oladejo also said despite the challenges posed by COVID-19 pandemic, Governor Sanwo-Olu has been able to surpass the expectations of Lagosians in key areas of governance.

According to him, the pandemic brought out the best in the governor as the way he managed the situation earned him applause both from within and outside the country.

“Governor Sanwo-Olu has been able to surpass the expectations of the majority of Lagosians in the past one year. When one is coming into government, a lot of unexpected and unpredictable issues play themselves up”.

“ The pandemic threw up the leadership quality in the governor, he was on top of it in words and action. Lagosians were able to leverage on that and have confidence in the government they elected”.

“To put the icing on the cake, he was always communicating, doing daily briefing twice or thrice in a week; making sure Lagosians are abreast of the plans of the government to ameliorate situations, provide medicals and support at all levels”.

“Let’s take the pandemic out, which has been more or less a big distraction to his governance. Since the pandemic has been easing out, we are all aware of lots of activities going on in the government under the THEME agenda. Just last week, 255 roads.