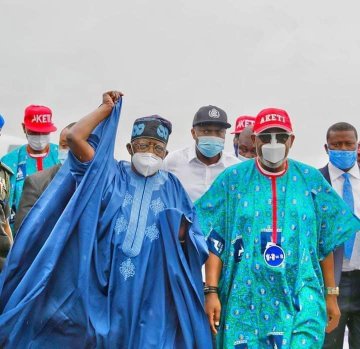 While mobilizing for his October re-election, Governor Rotimi Akeredolu made a point in front of the traditional rulers gathered before him: his victory is part of the preparation for a Yoruba presidency in 2023.

And present at the Monday gathering is the APC National Leader Bola Tinubu who is believed to be eyeing the top government job in 2023.

But the Lagos former governor has yet to declare his intention.

Not that declaring means as much as the spade work his political structures across the southwest are doing already, starting with the Ondo guber election.

“The October 10 election in Ondo State is not about Akeredolu but about the future of Ondo State and the entire Yoruba nation,” Akeredolu said shortly after he and Tinubu commissioned a project in the state.

“Whatever the outcome will be shall determine our seriousness in the quest for the 2023 presidency.”

Tinubu, a veteran campaigner, has been in Ondo with the APC campaign council to support the governor who just found his way back to Bourdillion, after years of cold war between the two.

Many political groupings and individual leaders of thought in the southwest and the north have been dialing up the 2023 narrative in favour of the APC national leader.

The most recent advocate was Tanko Yakassai, a member of the northern elite, who said Tinubu is a better planner than President Muhammdu Buhari.

Teaching in Lagos: 20 Outstanding Teachers to Get Cars – Sanwo-Olu

Teaching in Lagos: 20 Outstanding Teachers to Get Cars - Sanwo-Olu