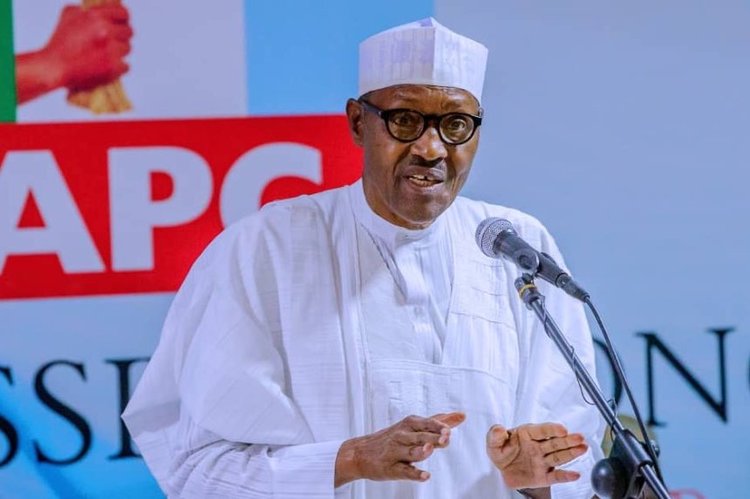 The All Progressives Congress (APC) has hailed what it described as revolutionary steps taken by President Muhammadu Buhari to reposition the country, declaring that the administration has gradually begun implementing the report of the 2014 National Conference as well as restructuring the Federation.

The party disclosed this in the September edition of “The Progressives”, its monthly journal published in collaboration with the Progressive Governors’ Forum PGF.
With the title, “Calm Down! Restructuring has begun”, the party explained how President Buhari is leading a real revolution and restructuring Nigeria.
It stated that past administrations had splashed billions of taxpayers’ funds to convene several national conferences, but rather than give teeth to recommendations of those conferences, they have left those reports unattended to.
APC also threw a subtle jibe at the Peoples Democratic Party PDP, accusing it and its Presidential Candidate in the 2019 general elections as politically exploiting simplistic narratives on the vexed issue of restructuring.
“It must be said that the calls for restructuring by many partisans is often time a populist and opportunistic ploy to latch on and politically exploit simplistic public narratives on the panacea to Nigeria’s problems and not necessarily for its realism and practicability.
“In the lead-up to the 2019 general elections, one of the visible presidential candidates and his political party were widely accused of dubiously using selective and bespoke restructuring rhetoric for specific audiences during their campaigns.
“While the presidential candidate and his political party refused to speak on the nature of the restructuring they canvassed, their restructuring rhetoric was rightly seen and dismissed as a convenient, simplistic and populist gimmick aimed at whipping up and exploiting perceived sentiments ahead of the 2019 elections.
“Well, their plan failed woefully, as Nigerians overwhelmingly re-elected President Muhammadu Buhari, who has evidently and progressively began restructuring the country in line with the 2015 election promise to ensure true federalism and devolution of powers.
READ ALSO:  #2015 APC Pledge to Nigerians: We ve Abandoned Our Manifesto

“While some purported proponents for restructuring have been rightly paraded as divisive ethnic champions seeking basically a geographical restructuring, it is important to note that in addressing the issue of restructuring, the political and administrative framework of Nigeria, the major question to be addressed is: how can we effectively harness ethnic and religious plurality and diversity in our federation and whether the political architecture of Nigeria is truly reflective of the federalist principles as envisaged by the nation’s founding fathers.

“This, indeed, informed the setting up of the Kaduna State Governor Nasir El-Rufai-chaired APC committee in 2017, which came out with far-reaching recommendations.
“The committee considered exploration of mineral resources, state police, devolution of power and resource allocation among federating units, form of government, independent candidacy, state creation, fiscal federalism, the land tenure system, power-sharing and rotation, resource control, state constitution, states re-alignment and border adjustments and the secular status of the federation.
“A practical approach to implement the committee’s report is being considered by the federal government”, the APC said.
APC recalled how the 2014 Confab had recommended allocation spread to engender an all-inclusive development of all regions in the country, and that government must ensure an even distribution of projects spread across the six geo-political zones in the country.
The party said “since he assumed office, President Muhammadu Buhari has consistently proved that he is the president of all sections of the country, regardless of faith, ethnicity and political affiliations”.
It added that Nigeria is currently a huge construction site, with all the 36 states boasting of one or more ongoing or completed projects.
On local government autonomy where the confab recommended their financial autonomy and that states must have the constitutional backing to create local governments in line with their developmental needs, APC said; “Ask any local government chairman why he has been unable to unclog the overflowing drainage down the street, light up the dark alley in the neighbourhood, patch the pot-holes that have damaged many cars and caused accidents or even pay teachers, and all you hear is that they lack the funds to execute these tasks”.
The party said the situation has now changed with the financial autonomy granted that tier of government by President Buhari.
APC recalled that to address poverty and social inclusion, the conference had proposed that the federal government revisits civil service salary structure, declaring that President Buhari has implemented that recommendation by his approval of the new minimum wage of N30, 000 which had since taken effect.
It said the president also signed Executive Order 10 to give backing to the recommendation of the confab which advocated financial autonomy for the Judiciary and the Legislature.
Other conference recommendations that the APC said President Buhari has implemented include addressing poverty and social inclusion as well as economic diversification.
It said the president has also implemented the recommendation for restructuring the security architecture through effective community policing.
“With these aforementioned fundamental reforms being introduced into the nation’s polity already in place, and with many more still in the pipeline, Nigeria under President Muhammadu Buhari is on the path of an irreversible political and economic rejuvenation.
“To the advocates of restructuring, calm down, the exercise has begun in earnest”.