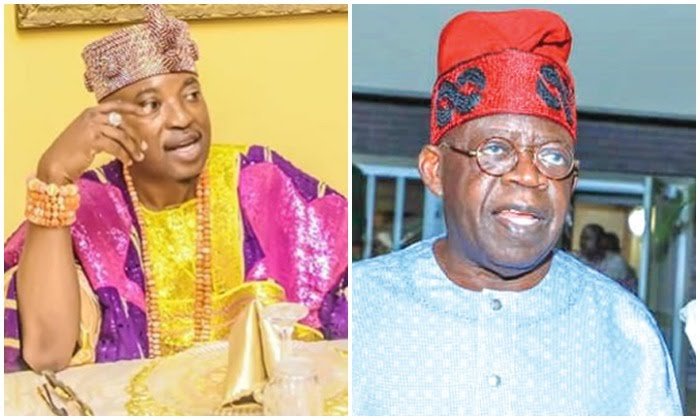 The Oluwo of Iwo in Osun State, Oba Abdulrasheed Akanbi, has described All Progressives Congress chieftain, Asiwaju Bola Tinubu, as a living legend in Yorubaland and a modern-day Chief Obafemi Awolowo for the people of South-West Nigeria.

The monarch, therefore, called on all Yoruba sons and daughters to support and accord the necessary regard to the former Lagos State governor as an “image of Yoruba nation”.

Awolowo, who died on May 9, 1987 at age 78, was a Nigerian nationalist and statesman who played a key role in Nigeria’s independence movement. The first Premier of the Western Region under Nigeria’s parliamentary system, from 1952 to 1959, was a widely acclaimed leader of the Yoruba people.

In a statement titled, ‘TInubu, a Living Legend, Says Oluwo’ and signed by Olatunbosun Oyintiloye, the Special Adviser on Civic Engagement to Osun State Governor, Gboyega Oyetola, the royal father spoke on Friday while receiving Oyintiloye who paid him a visit at his palace in Iwo.

The governor’s aide quoted Akanbi as saying, “Tinubu should be made the image of Yoruba nation who shall be speaking on our behalf because he’s a symbolic living legend.

“Because of his sterling qualities which he has exhibited over time, he should be likened to our late foremost leader, Chief Obafemi Awolowo whose charismatic personality and progressive leadership have immensely contributed to the plenary development of the Yoruba nation.

READ ALSO:  PDP Governorship Primary in Zamfara is invalidated by the court

“It’s time Yoruba rallied their support round Tinubu and not crucify him like Awolowo who was made to suffer despite his sacrifices and the developmental monuments such as the establishment of the University of Ife now Obafemi Awolowo University, the cocoa house, Western Nigerian Television, the first television service in Africa and free education policy among others which were recorded under his leadership.

“Tinubu has equally laboured for the nation through his focused leadership which has facilitated the growth of Yoruba sociopolitical space through a number of leaders who are at the helms of affairs across the country.”

Oyintiloye further stated that the “monarch urged Yoruba people not to allow Tinubu die before acknowledging his contribution to the development of the nation like it happened to Awolowo.”

In his reaction, Oyintiloye said the administration of Oyetola remained resolute and would continue working to ensure the development of all sectors of the economy for the benefits of the masses.

“He then commended Oluwo and the people of the community for their commitment towards Oyetola’s administration as he assured them of more developmental initiatives from the administration,” the statement concluded.