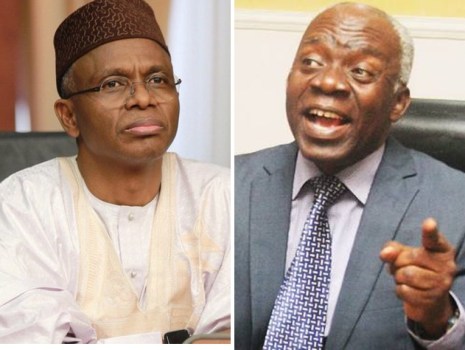 Popular human rights lawyer, Mr. Femi Falana, SAN, has thrown his weight behind the withdrawal of the invitation extended to the governor of Kaduna State by the Nigerian Bar Association (NBA).

NBA had earlier invited him as a speaker in the forthcoming NBA Virtual Annual General Conference 2020.

Following a petition initiated by some lawyer and was later signed online by over 1,300 persons, NBA withdrew the invitation.

Reacting, Falana commended the decision in a letter addressed to the chairman of the Conference Planning Committee, Professor Konyinsola Ajayi, SAN, dated 19th day of August, 2020.

Going down memory lane, he reminded how the entirety of Nigerian Lawyers boycotted all courts in the country from March 13-14, 2006 to protest the disobedience of court orders by some officials and agencies of the Federal Government.

“3 out of the 8 orders listed by NBA at the material time were flagrantly disobeyed by the administration of the Federal Capital Territory under the leadership of Mr. Nasir El-Rufai,” he recalled.

He further noted that the present Governor of Kaduna State has continued to refuse to comply with court orders.

According to Falana, the Federal Government was so embarrassed that it directed the then-Attorney General of the Federation and Minister of Justice, Chief Bayo Ojo SAN to ensure compliance with the disobeyed orders.

“It is on record that while other departments and agencies complied with the court orders the Federal Capital Territory ignored the directive of the Federal Government to kowtow to the rule of law.

“As if that was not enough, Mallam El-Rufai has continued to treat court orders with absolute contempt.” He said.

Mallam El-Rufai has a penchant for disobeying court orders, he noted, and reminded the Conference Planning Committee that it is bound by the provisions of the Nigerian Bar Association.

“The invitation extended to Mallam Nasir El-Rufai to address the 60th Annual General Conference of the Nigerian Bar Association should be withdrawn,” he stated categorically.