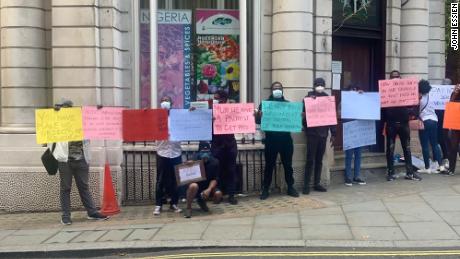 When Nigerian student Mercy Eyo landed a foreign postgraduate scholarship in July 2019, she had just lost her father. A year earlier, her mother had passed away.

She was elated about the prospect of starting a master’s degree in global health care management at Coventry University, in the United Kingdom, with a scholarship from a Nigerian government agency.
“I was super excited … I felt it was a consolation that would change my life forever,” Eyo said.
“It was that one little time I had hope in the Nigerian dream,” she told CNN, “because I wanted to return home afterward to offer what I had to the society.”

However, that dream has turned into a nightmare for Eyo who said she is now living a hand-to-mouth existence and awaiting scholarship funds that have failed to arrive 12 months later.

Eyo, from Bonny Island, southeastern Nigeria, is one of more than 200 students who landed a scholarship through Nigeria’s Niger Delta Development Commission in 2019.
Eyo Mercy, one of the NDDC scholars who did not receive her scholarship funds.
CNN has seen a scholarship letter dated July 29, email exchanges between her and the awarding body and scanned copies of the letters she sent to the commission in December 2019 requesting funds to process her travel arrangements.
She was told to make her way abroad and the money would later follow, but despite selling her laptops, phones and other valuable properties, Eyo wasn’t able to raise her travel funds and visa processing fees and lost her place at the UK’s Coventry University.
She remains in Nigeria with no signs of the funds promised to her.
“These are things that make me cry sometimes or feel depressed,” Eyo told CNN.
Other scholarship students from Nigeria that CNN spoke to were able to make their way abroad. But they are also still waiting for the promised funds.
They told CNN that their emails and correspondence with the agency have been mostly ignored since September 2019.
The scholars are scattered in various universities across the United States, the United Kingdom, New Zealand, Australia, and Canada.
Andrew Saba says he feels ‘betrayed by Nigeria.’ Andrew Saba is studying for a master’s degree in public health at the University of Aberdeen.
“I don’t know the worth of a Nigerian life to the people in power. I feel betrayed by Nigeria … I can’t understand how a country can abandon her brightest of minds in a foreign land. I can’t relate to priorities of the country,” said Saba.
“I am disappointed. It is supposed to be a joyful thing to get a scholarship from your country. Numerous countries give their citizens scholarship… but ours require extra activism to work. This is not how it should be.”
The students said they are going through a lot of hardship due to a lack of funds and are unable to engage in menial jobs to survive because of the impact of the coronavirus pandemic.
Each masters’ scholar is owed $30,000, while the PhD students are owed $90,000, which runs for the duration of their three-year program.
Others say they live on charity from family at home and friends abroad, while looking for new jobs to start paying their debts and bills.
Some of them have been told by their universities that their graduation isn’t possible until their debts are paid.
In May, after growing pressure, the agency paid a “take-off” grant of around $1,290. This was an initial payment that was supposed to help the students with their initial visa processing and traveling costs last year.

Students recently held protests at the Nigerian High Commission Office in London. The protesters caught the attention of President Muhammadu Buhari who, on August 4, ordered the NDDC to immediately pay the outstanding sums owed to the students stranded across the globe. 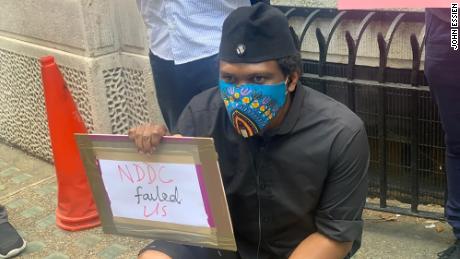 One of the students protesting outside Nigeria’s High Commission’s office in London.
The NDDC promised to pay the fees by the end of that week, adding that the death of the executive director of finance as well as the coronavirus pandemic was responsible for the delay in paying their fees.
“President Buhari … has ordered that all stops be pulled to pay the students by the end of this week. We expect a new (executive director of finance) to be appointed this week. As soon as that is done, they would all be paid,” the statement released on August 4 by Charles Odili, NDDC director of corporate affairs, said.
So far, none of the students CNN spoke to has received their outstanding payment.
CNN has contacted NDDC to find out why the payments to the students has still not been made two weeks after the President’s order. The NDDC has not yet responded to the request for comment.
The scholarship program was developed to fund the study of marginalized young people from Nigeria’s oil-rich Delta region in studies that could aid its development.
Despite accounting for 70% of Nigeria government revenue, the Niger Delta remains impoverished and faces numerous challenges such as oil spills, gas flares and vandalism.
The NDDC was established to drive the development of the region.

The NDDC agency is currently embroiled in a multimillion-dollar corruption probe. Nigeria’s President Buhari has ordered a forensic audit of the commission’s activities from 2001 to 2019 after it was unable to account for around $209 million spent in less than a year.
Kemebradikumo Pondei, the acting managing director of NDDC last month appeared to faint while answering questions from Nigeria’s lawmakers on how the agency spent around $100 million in the past few months.
While responding to questions on the students’ scholarships and other incidents of unaccounted spending, he slumped, causing chaos in the room and forcing the investigative hearing to be stopped temporarily.
After the hearing the NDDC issued a statement saying that Pondei had been ill and had attended the hearing against his doctor’s advice. Critics have suggested the incident was a ploy to thwart the probe. It has not resumed since, although the agency was ordered to repay funds, according to local media reports.

The events at the hearing have become the subject of memes and jokes among Nigerians. But life is no joke for some of the students stranded abroad without the money promised for their fees and upkeep.
Protests at Nigeria’s High Commission’s office in London. John Essien was a medical doctor in Nigeria and is now studying a for a master’s in health economics and health policy at the University of Birmingham in the UK.
Essien said he sold properties and took loans to fund his overseas travel after delays in securing his scholarship money before he left Nigeria in September 2019.
“I knew previous scholars faced delays in getting paid. But I wasn’t expecting it to exceed three months. When it did, I realized I wasn’t prepared for what was to come,” he told CNN.
Three months of waiting passed and his debts rose, Essien said. He was forced to rely on friends for money to eat and pay his rent.
In December 2019 he got a part-time job as a dishwasher with a company in Birmingham.
At various points, he said he has worked as a receptionist, porter, carpenter, bartender, and crowd control officer at Premier League soccer match venues.
Essien said he has been ihn contact with the other Nigerian students who received scholarships from the NDDC.
They all have tales of severe hardship. One of the students contracted Covid-19 while working as a carer in a home, another one has also had access to the school’s student portals blocked for non-payment of fees.
Essien said this month he narrowly escaped eviction from his apartment after missing his payment deadline by more than 20 days.
The huge economic impact of the pandemic also means that his former means of income have dried up. “With less than one pound in my account, how do I continue begging around? Why should I deal with this kind of mental pressure?” he asked.
Brooom Nigeria
broomforeveryhome@gmail.com
08068505032 whatsapp
09054006557 Text Message
Facebook.com/broom.home.1
Twitter@broomhome
Instagram@broomhome
READ ALSO:  SW NUJ Invested Ogbeni Aregbe as Grand Patron in Ibadan
Previous Post