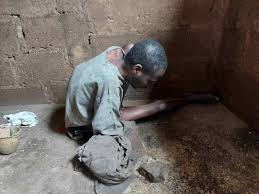 A 35years-old man identified as Ibrahim Lawan, allegedly held in captivity for 15 years by his father at Skeka quarters within Kano metropolis has been rescued by the police.

A video clip circulating shows how operatives of the police in the state evacuated the man on a stretcher from an uncompleted apartment into a waiting ambulance to an undisclosed hospital for medical attention.

It was reliably gathered that Lawan was 20-years-old when he was locked up in captivity.

His father simply identified as “Malam Lawan” is the chief imam of a mosque in the state.

It was gathered that the detectives attached to the Kano state Headquarters of the state Command Bompai rescued the 35 years old man around 11:45 am on Sunday.

The spokesman of the Kano State Police Command, Mr Abdullahi Haruna Kiyawa, confirmed the incident in Kano on Sunday.

Abdullahi, a Deputy Superintendent of Police, said the victim, Lawan, had since been moved to the hospital for medical attention, adding that investigation had been launched into the matter.

Lawson’s rescue is coming barely five days after one Ahmed Aminu a 30years old was confined in a garage by his father Aminu Farawa was also rescued by the police.

FG weighing options of retaliation over Ghanian treatment on Nigerians

FG weighing options of retaliation over Ghanian treatment on Nigerians