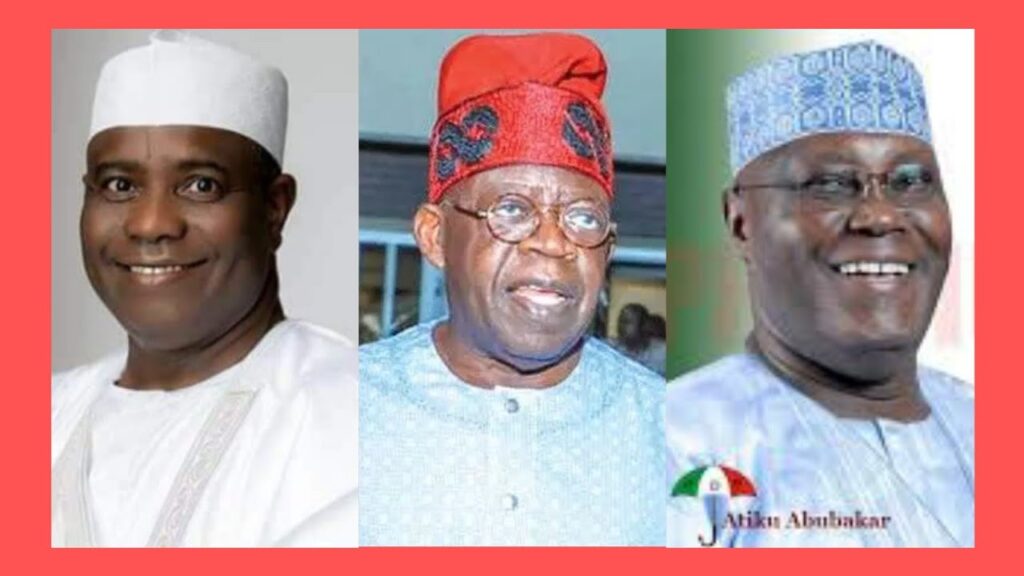 Major gladiators, who are nursing presidential ambition in 2023, are determined in their quest to use the October 10 governorship election in Ondo State as an avenue to test their strengths, Brooom Nigeria has gathered.

Some of these political heavyweights are Asiwaju Bola Tinubu, National Leader of the ruling All Progressives Congress (APC), who is leading the charge for Governor governorship candidate in the election. Rotimi Akeredolu, the party’s

Others are former vice president and presidential candidate of the Peoples Dem­ocratic Party (PDP) in the 2019 election, Atiku Abubakar, who is a strong pillar behind Eyitayo Jegede, the PDP flag­bearer for the Ondo election.

Another presidential hope­ful, Aminu Tambuwal, Soko­to State governor, though a member of the PDP is report­edly queuing behind Agboola Ajayi, who is set to contest the governorship election on the platform of the Zenith Labour Party (ZLP).

The trio are reported to be very much interested in the election which, according to political analysts, will go a long way in proving their acceptability in the South West.

Even though the APC had named Lagos State governor, Babajide Sanwo-Olu, to head the 104-member APC Nation­al Campaign Council for the Ondo governorship poll, sources said the decision was influenced by Tinubu after consultation with the Caretaker Committee lead­ership of the party led by Governor Mai Mala Buni of Yobe State.

A credible source in the party said Tinubu is very much interested in keeping the “South West, which is his base as united as possible. That was why he is backing Governor Akeredolu. To show that he is one hundred percent behind Akeredolu, he nominated Sanwo-Olu as the chairman of the Nation­al Campaign Council for the election.

“Sanwo-Olu couldn’t have accepted the position if Tinu­bu is opposed to it. Tinubu is ready to mobilise all resourc­es to prove a point in the Ondo election”, he said.

Also, a credible source in the PDP informed Brooom Nigeria that the National Working Committee (NWC) of the party may have re­solved to dump Jegede follow­ing his refusal to yield to the party’s demands in accepting Ajayi as running mate.

Our source said the par­ty leadership led by Prince Uche Secondus believes that a Jegede/Ajayi combination would have secured victory for the party in the main elec­tion as both men are formida­ble politicians with support­ers across the three senatorial districts in the state.

“As it is now, Atiku is the major pillar of support for Jegede. Jegede lived all his life in Yola. That was where he started his career and got his SANship. So, you can un­derstand why Atiku has pref­erence for him.

“Former Governor Oluse­gun Mimiko who is the na­tional chairman of ZLP has given his support to Ajayi who is running on his party’s plat­form. He has rebuffed several entreaties from Jegede’s camp despite being his major back­er in 2016. Mimiko also wants to prove a point with ZLP, a party many had thought was dead in Ondo State.

Aside Mimiko, some PDP leaders who are backing Ajayi are Aminu Tambuwal and Governor Nyesom Wike of Rivers. The three of them have reportedly met and sealed the ZLP deal for Ajayi who will announce his mem­bership of the party any mo­ment from now.

“Don’t also forget that Sec­ondus is Wike’s man any day. So, he will likely align himself with any position taken by Wike. The agreement is that Ajayi will return to the PDP if he wins the governorship election on ZLP platform”, our source said.

I Am Glad to Witness Progress – Osinbajo

I Am Glad to Witness Progress - Osinbajo