‘I ‘M Ready to Lay My Life for Nigeria’ Mailafia

by Brooom
in National Security
4 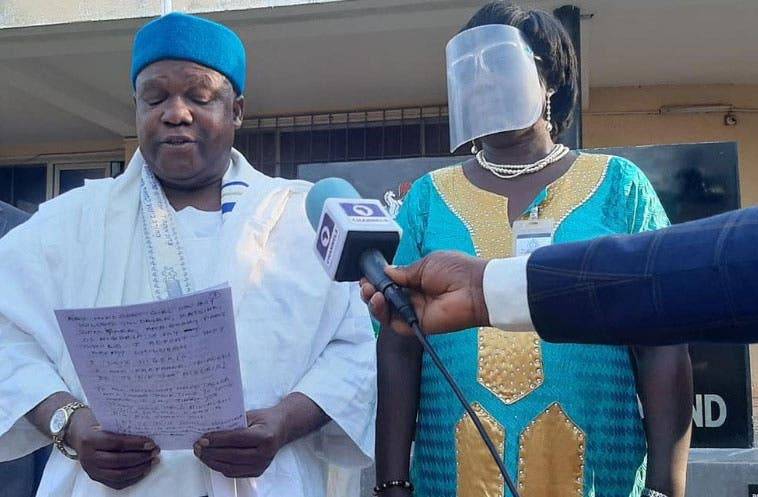 Obadiah Mailafia, former deputy governor of the Central Bank of Nigeria (CBN), says he is ready to lay down his life for his country like Nelson Mandela, former president of South Africa.

Mandela, the anti-apartheid revolutionary leader, was sentenced to life imprisonment in 1962; he served 27 years in prison.

Mailafia was invited by the DSS over a claim he made that a governor from the north is the leader of Boko Haram — he made the claim while being interviewed on an Abuja-based radio station on Monday.

He reported to the Jos office of the DSS at about at about 12:48 pm, accompanied by his lawyers, Pius Akubo, a senior advocate of Nigeria (SAN), and Yakubu Bawa.

Hundreds of his supporters also stormed the office of the DSS at Kuba road, carrying placards and they didn’t leave till he was released at about 6:30 pm.

Addressing his supporters, Mailafia said he stood by what he said during the radio programme.

He maintained that he was treated professionally by the DSS, adding that a section of the interview was lifted, leaving out the context in which he made the statement.

“We had a lively and intense interview over a radio interview I granted. That interview which was meant for an FM radio station, some just picked the clip — a small section of the 55 minutes broadcast — and put it on social media and it went very very far all over the country, raising a lot of concerns,” he said.

“What I want to say is that, yes, all of those words were made by me. You know if the whole of the 55 minutes was played out, the context of what I said in a small clip that went viral would have become clearer.

“This is not the time to disown what I said. Yes, I was privy to some very sensitive information which all statesmen are entitled to have by virtue of our public roles.

“I know that I should have taken more care to corroborate some of the information I received, but perhaps some of it was uncorroborated. I was in no position to follow them to the camp to corroborate what was going on.

READ ALSO:  'We would Engage Hunter to Protect Nigerians' Gov Zulum to Army

“But I am not a sensationalist, I am an economist and a central banker; by nature we are not given to sensation. Let me make it clear: I am a humanist; I am a man of peace. Even my name, Mailafia, means a man of peace.

“From the bottom of my heart, I love our country dearly and I abhor all the killings and violence which the innocent people of this country have been subjected to. I pray that Nigeria will never experience another civil war.

“I love Nigeria. Like Mandela, let me say if need be, I am prepared to give my life for Nigeria.”

Mailafia thanked officials of the security agency for their conduct, and prayed for peace in the country.

“One of the greatest compatriots of this country, General Theophilus Yakubu Danjuma, observes that no country can survive two civil wars. One civil war is bad enough. I also pray that the killings will stop in Zamfara, in Daura, in Katsina, in Birnin Gwari, in my beloved southern Kaduna, in the whole of the middle belt, in Borno, Adamawa and other places,” he said.

“Let us join hands together to build a new country. Let us work together to save our country and I pray that all of us will do our part to maintain the peace and make sure that our country makes progress.

“I want to thank the officials of the state department. They have done a tremendous job. They treated me professionally. I have not been rough handled and they have been very very fair and gracious to me.” The Cable reporting for;