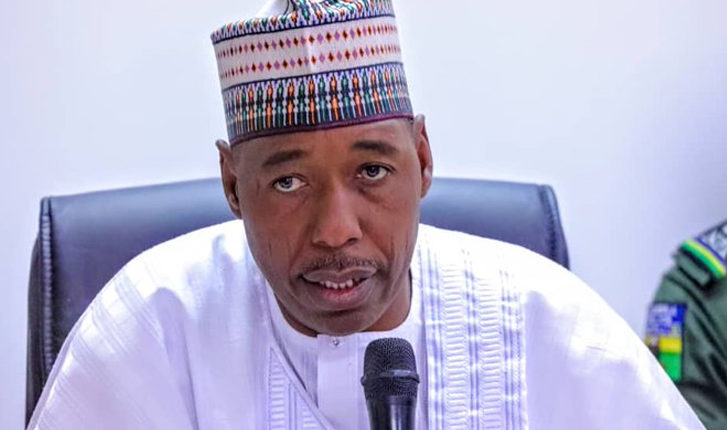 Before reacting to that question-headline, please, take a little while to walk in the ‘shoes’ of Borno governor, Professor Babagana Umara Zulum.

A few persons have been writing to condemn what they perceive as Zulum’s political incorrectness. They refer to the governor’s expression of concern over ceaseless killings of the people he serves and swore to protect; and on gun shots directed at him and his convoy in Baga. “The governor plays to the gallery”, one of them wrote.

In my understanding, the problem of these critics is not the merit of Zulum’s concern, but that ‘he speaks in public to undermine the military.’ In other words, Zulum should only raise security issues at closed-door meetings.

Well, if my school mate, pastor Samuel were to respond to one of the articles, he would certainly employ a prayer-quote: “Father forgive them for they know not what they do [or write about Zulum].”

Anyway, here is what we know. It is a quick and chronicled background to being in Zulum’s ‘shoes’.

On Thursday, May 30, 2019, Zulum’s first activity as Governor, was a closed-door meeting in Maiduguri with the military’s top command, leading the fight against Boko Haram. Afterwards, he summoned a security meeting with traditional rulers.

On Wednesday, June 19, 2019, Zulum requested and met President Buhari for one-on-one closed-door meeting, during which the governor tabled issues on Boko Haram’s resurgence in Borno.

On Friday, August 23, 2019, in the wake of simultaneous killings by Boko Haram in Gubio, Magumeri and Konduga LGAs, Zulum returned to the presidential villa for a second one-on-one closed-door meeting with President Buhari. Zulum expressed reservations over the military’s new idea of concentrating troops in ‘super-camps’ rather than the operational strategies they used in gaining grounds back in 2016. The previous day, Thursday, August 22, Zulum had met the Vice President, Yemi Osinbajo, over the same issue.

On Wednesday, February 12, 2020, Zulum had private sessions with President Buhari in Maiduguri. The President had paid empathy visit to Borno, over Boko Haram’s massacre of 30 travellers at Auno.

On Thursday April 9, 2020, Zulum was back to the villa for another one-on-one closed-door meeting with President Buhari, to discuss implications of President Derby’s led Chadian onslaught on Boko Haram. Zulum was concerned that insurgents in Chadian territory were fleeing into Nigerian portion in the shores of Lake Chad.

On Monday, June 15, 2020 (an interval of five weeks) Zulum returned to the presidential villa for another one-on-one closed-door meeting with President Buhari. This time, Boko Haram attacked and massacred more than 80 villagers in Gubio.

In 15 months, Governor Zulum had at least five one-on-one closed-door meetings with Nigeria’s President, Commander-in-Chief, over security issues in Borno, and at least 20 private sessions with the Chief of Army Staff, Lt. General Tukur Buratai. These were aside regular phone calls.

Zulum has held series of one-on-one meetings with other service chiefs, and the Minister of Defence.

Zulum has held hundreds of one-on-one meetings with successive theater commanders, GOCs, brigade commanders and other top military officers in charge of ‘Operation Lafiya Dole’, the 7 Division of the Nigerian Army, and brigades across Borno.

In January 2020, Zulum had travelled to N’Djamena, Chad, for closed-door meetings with commanding officers at the headquarters of the Multinational Joint Task Force.

Zulum had declared an official day of statewide fasting and prayers (Monday, February 24, 2020) to seek divine intervention for the military’s peace building efforts to succeed. Muslims and Christians in Borno and beyond, responded to the governor’s call with a fast that Monday.

To match prayers with action, in barely 15 months, Zulum approved the procurement and deployment of almost 400 Toyota Hilux vehicles to the fight against Boko Haram. These vehicles are critical to the operations of the military, other security forces and volunteers in the fight against Boko Haram. The Borno State Government regularly supports these operational vehicles with fuel and maintenance.

Zulum also supports families of soldiers, especially those killed in combat. The governor makes it a habit to pay morale boosting visits and to offer welfare support to military formations in all his many humanitarian trips across the 27 local government areas in Borno.

At the government house in Maiduguri, Zulum accords special treatment to military commanders and heads of other security establishments. With or without appointments, military heads walk to Zulum’s office anytime the need arises, and the governor suspends everything else. He attends to requests, often for ‘logistics’, brought by security heads, and he is particular about the military’s.

So much is the governor’s commitment that the Chief of Army Staff, Buratai, on Sunday, May 24, 2020, publicly described Zulum’s support for the military as being “immeasurable.”

Before the COAS, Nigeria’s Minister of Defence, Major General Bashir Magashi (rtd) said on Monday, December 16, 2019, that the Nigerian military was happy to have in Zulum, “a governor that is very versatile and dedicated in the operational activities of fighting Boko Haram.” Magashi also spoke in public.

In his first week as governor, Zulum increased the monthly allowances of thousands of volunteers in the Civilian JTF, hunters and vigilantes. Zulum re-equipped the volunteers and recruited more across all LGAs. He knows they critically support the military.

The governor also established a security trust fund, hosted a north-east strategy summit on security, and when invited, attends all security related programmes, in and outside Borno.

However, in the midst of all these strategic meetings, series of security interventions and politically-correct consultations, one thing remained unchanged – hundreds of people in Borno are continually massacred by Boko Haram and communities sacked. Gun shots were directed at the governor in Baga, where army commanders confirmed to Zulum, that there was no Boko Haram. So, who fired the shots: non-existent Boko Haram, soldiers, or ghosts?

Yet, abductions and videotaped executions continued.

Now, which leader, with undiluted conscience, would remain silent because of political-correctness? Who would speak for bereaved and displaced communities? Whose voice, above the governor’s, would loudly call for the decisive action needed in Borno?