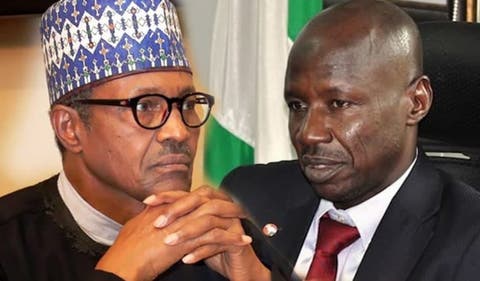 The Judicial Commission of Inquiry set up to investigate the suspended acting Chairman of the Economic and Financial Crimes Commission,Ibrahim Magu, is expected to submit its report latest next week going by the terms of reference given to the panel by the President, Major General Muhammadu Buhari (retd.).

The document inaugurating the panel which was personally signed by the President stated that the commission had 45 days to complete its probe of the suspended EFCC boss.

The document is titled, ‘Instrument Constituting a Judicial Commission of Inquiry for the Investigation of Mr. Ibrahim Magu, the Ag. Chairman of the EFCC for Alleged Abuse of Office and Mismanagement of Federal Government Recovered Assets and Finances from May 2015 to May 2020’.

Buhari listed the seven members of the panel to include a former President of the Court of Appeal, Justice Ayo Salami (North-Central); Deputy Inspector-General of Police, Michael Ogbezi (South-South); a representative of the Federal Ministry of Justice, Muhammad Babadoko (North-Central); and Hassan Abdullahi from the Department of State Services (North-Central).

National Security & Baga Shootings: As Zulum, What Would You Do? - Isa Gusau