‘We would Engage Hunter to Protect Nigerians’ Gov Zulum to Army 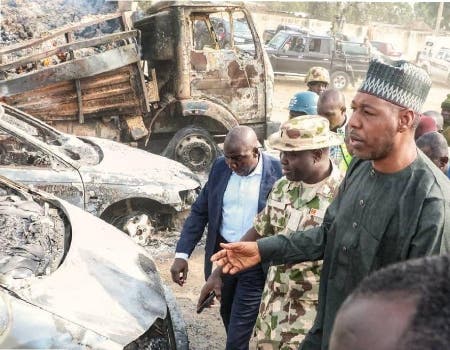 (‘We would Engage Hunter to Protect Nigerians’) Gov Zulum to Army

BORNO State governor, Professor Babagana Zulum, on Thursday said that if the military could not secure Baga, he would engage hunters to keep the town safe.

Zulum spoke a day after his convoy was attacked by suspected Boko Haram terrorists in Baga while on his way to some Internally Displaced Persons’ camps in Kukawa Local Government Area of the state.Zulum decried the incident and the inability of the security agencies to curtail the activities of insurgents in the state, especially in Baga.

Zulum, who had earlier been briefed by troops that Baga was free of Boko Haram insurgents, returned to ask what led to the attack on his convoy.

“The troops have been in Mile 4 for over one year. There is complete sabotage. The problem is not with President Buhari, or General Buratai but the command and control structures. There is need to look into the command structure.

“We have over 80,000 IDPs in Monguno. They cannot continue to depend on non-governmental organisations and others for food. We have created opportunity for them to go back to their communities and continue with their business and farming activities.

“After Sallah, we will go back to Kukawa. We will give time to the military; but if they will not clear Baga, we will mobilise our hunters and vigilantes to recapture Baga. We can’t continue like this. People have taken their destiny in their hands.”

Meanwhile, the Nigerian Army will investigate Wednesday’s attack on the convoy of Governor Babagana Zulum of Borno State by suspected Boko Haram terrorists, the acting director, Army Public Relations, Colonel Sagir Musa, disclosed in a statement on Thursday in Abuja.

According to the News Agency of Nigeria (NAN), Musa said that the governor’s convoy came under terrorists’ fire while visiting Baga town.

He said the governor had earlier paid a visit to the Commander, 19 Brigade at the Nigerian Army Super Camp Baga where he was briefed about the prevailing security situation in the general area.

According to him, the unfortunate incident occurred shortly after the governor and his entourage departed the Super Campaign to visit other parts of Baga town.

“The incident forced the governor to abort his planned movement to Baga.

“Although details of the unfortunate incident are sketchy and under investigation, efforts are ongoing to comb the area where the incident occurred with a view to tracking down and deal decisively with the attackers.

“An investigation is also in progress to identify the circumstances that led to the attack,” he said.

Musa however, said that the attach was an isolated and most unfortunate incident owing to the fact that normalcy had since been restored to Baga with socio-economic activities picking up.

“Nigerian Army wishes to inform the general public that it will continue to discharge its responsibilities professionally with respect for the fundamental human rights of all Nigerians and in compliance with the extant rules of engagement.

“The good people of Baga town and indeed the entire Borno State are enjoined to continue to provide credible information that will assist the security agencies to successfully combat terrorism as well as apprehend and flush out the perpetrators of the attack,” he said.