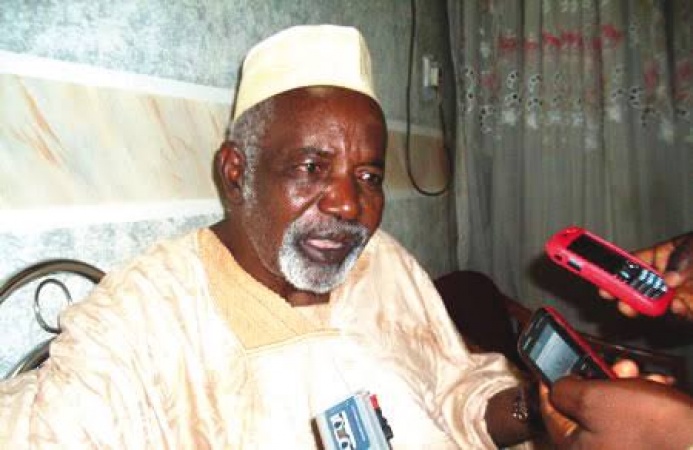 Second Republic Governor of Kaduna State, Alhaji Abulkadir Balarabe Musa has insisted that for the sake of  peace, justice and national unity, the presidency should go to the South East region of the country in 2023.

Reacting to the clamour for the presidency to shift to the South East, the former governor said,

“I stand by what I’ve said, that the Presidency should go to the South East, for the sake of peace, national unity and justice. I’ve talked quite a lot about that, I don’t need to say anymore”.

Mr Issa Aremu argued that the constitution should be the determinant factor in the choice of the next president.

According to the labour leader,”we should go with the spirit of the constitution.

The constitution has defined how we can produce a President. It’s not about geographical location, it’s not religion bound, it’s not gender bound, there is no region limit, no state limit to where a president can come from.

So, I think we need to first get that clear, that the Presidency, the governorship, the chairmanship of local government, are open to all Nigerians who meet the conditions as spelt out by the constitution.”

While calling on the media to promote the spirit and the content of the constitution, he however noted that there would always be political calculations and alliances, based  on what the parties perceive as fairness and equity.

“But that would be the job of the parties. As a member of Labour Party, I can’t tell you from where the President should come from beyond what my party agrees upon.

Those are parties arrangements, they will work it out”, he said. Aremu argued that “as someone who held many superior positions in the labour union, Nigerian workers never asked me which region I came from. The Nigerian workers put confidence in you based on your ability to represent them, protect the interest of the workers and advance their welfare.”

“Nigeria Labour Congress has produced six Presidents, I don’t think anybody cared which region they came from.

I think what is good for Labour is good for the Federal Republic of Nigeria. There is no regional President, it is not known to the constitution, it has to be pan Nigerian.”

He added that, “I think rotational leadership, turn by turn arrangement will never deliver Nigeria, what will deliver Nigeria is the ability to serve selflessly.

The kind of presidency we need now in 2023 has to be all inclusive, it not only has to be pan Nigerian, it has to be pan African because the problems facing us go beyond Nigeria.

Whoever will lead should think beyond the narrow confines of Nigeria, whoever will lead Nigeria in 2023 should be able to think how we can drive the  African Continental Trade Agreement and has to think about the ECO currency which the French are undermining in the sub region.

So, I think Nigeria’s political class should get their thoughts right and stop this turn by turn mentality which is unhelpful. All this talk about rotational presidency may make sense before COVID-19, but after COVID-19 the world has changed,we must re-set ourselves.

We need a new language, this is not the time of sharing, it’s the time for survival,” he said.

In his own contribution, Shetima  Yerima, leader of Arewa Youth Consultative Forum, said that contrary to his previous position that power should remain in the North in 2023, he has now changed his position.

“If you look at it, I have now changed position. By the time you are thinking that power must reside in a region,you may cause havoc. My view now is on competence, any side of the country should mobilize adults who are competent,” he said.

Nastura  Ashir Shariff of Coalition of Northern Groups, CNG, said they have not commenced deep discussions into the politics of 2023 which to every discerning mind was dicey at the moment as well as very uncertain.

According to him, “that notwithstanding, the likely turn of events that will shape the politics of 2023 will be agitations for a major paradigm shift. Nigeria deserves a shift of power from its present base in the hands of old people with spent ideas and approach.

“There has to be a new thinking along a generational power shift rather than the current divisive and counterproductive quest for regional or sectional shift.

We should all start thinking Nigeria, not regional or ethnic. What we should be concerned with is to have a new breed of leaders with fresh, up-to-date ideas and dynamic energy to inject into governance.

It may therefore no longer matter which region or section of the country the president is coming from but rather his capacity, competence and reach would”.

Meanwhile, efforts have commenced towards galvanizing younger elements across the northern states towards achieving a paradigm shift in politics and development issues, a new movement of young Arewa people has said.

According to the Arewa Paradigm Shift Movement, 2023 politics in the north will be different because a paradigm shift in the focus of  Arewa politics and development challenges is now underway.

Nasir Dambatta, the group’s Director of Publicity said that “it is high time fresh ideas were injected into governance in Nigeria by young and dynamic new breed politicians.

It is abundantly clear by now, that only the young Turks are making waves on the nation’s democratic space today,” he said. The group said it would not join a section of Northern elite, which has been merely lamenting over the prevalence of poverty, insecurity, palpable healthcare, sorry state of education, gross lack of economic empowerment and the poor infrastructure that does not positively attest to years of northern leadership of Nigeria.

“We’re not persuaded by the claim that the young politicians now making waves on the democratic space are unprepared to assume the mantle of leadership, or mentor other younger ones, just because of one or two isolated cases. Our resolve was informed by the blatant failure on the part of the older brigade of politicians to considerably move Nigeria and Nigerians forward since they took over the reigns of governance in 1999.

“The passage of the Not-Too-Young-To-Run Bill, was to mobilise and further the interest of young, vibrant and versatile Nigerians to completely relegate our older politicians to playing advisory roles in the background. And we’re determined to fire the imagination of young politicians and crush their crisis of confidence in taking over reigns of democratic power in Nigeria by 2023.

“We’re fully prepared to boost the confidence of innovative and hardworking young politicians, especially in the North to step forward and stop being bystanders in power calculations that could determine what our future should look like, as from 2023″, the group said.  (Copied@Saturday Vanguard)