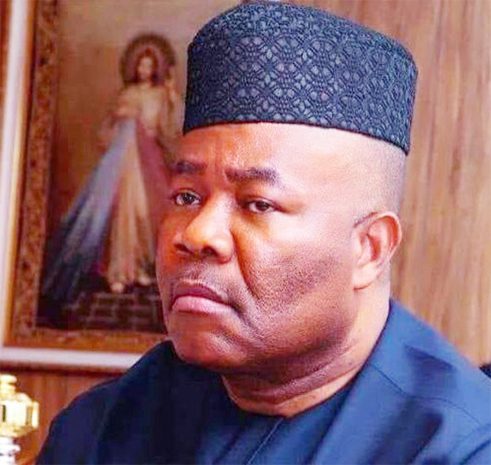 (NDDC & Missing #Billions: You (NASS) are a Major Beneficiaries) -Akpabio

The ongoing investigations into the alleged corruption in the Niger Delta Development Corporation (NDDC) by the House of Representatives Committee on NDDC assumed a new dimension on Monday as the Minister of Niger Delta Affairs, Sen. Godswill Akpabio disclosed that most of the contracts awarded by the commission are given to the National Assembly members.

The minister said from available records, most of the contracts at the NDDC are given to members of the National Assembly, telling them directly that “you people are the major beneficiaries”.

The minister who was grilled for about two hours had earlier during his appearance before the committee, accused the panelists of bullying him. The allegation was sequel to how he was interrupted while answering a question that bothered on whether some of the projects executed had the approval of the Federal Executive Council.

The panel was presided over the Committee’s Deputy Chairman, Thomas Ereyitomi following the resignation of the chairman.

Akpabio had told the committee that before he became minister, the commission operated about 300 bank accounts, among other obvious infractions. He however denied any wrongdoing in his capacity as the supervising minister.

The former governor did not also spare his major traducer and former Acting Managing Director of the commission, Mrs. Joi Nunieh, accusing her of neither participating in the mandatory one year programme of the National Youth Service Corps nor secured am exception letter.

While accusing her of insubordination, one of the reasons for her sack, the minister said “the former Managing Director of the NDDC was relieved of her appointment when I received a letter from the then Chief of Staff that she did not possess the requisite qualifications to be there.

“For instance, we have written twice to the National Youth Service Corps and twice they have insisted that she never served and that she does not have an NYSC certificate or an exception.”

Speaking at the hearing, the presiding chairman and deputy chairman of the House Committee, Ereyitomi thanked the minister for his time, explaining that the purpose of the committee was not to witchhunt anyone but rather to provide an avenue for proper clarification of issues.

“It is fair hearing that we are doing and we pray that as you leave here, the good direction that you intend to give the NDDC, you will continue to do it for the interest and particularly for the Niger Delta people whom we are here to serve”.